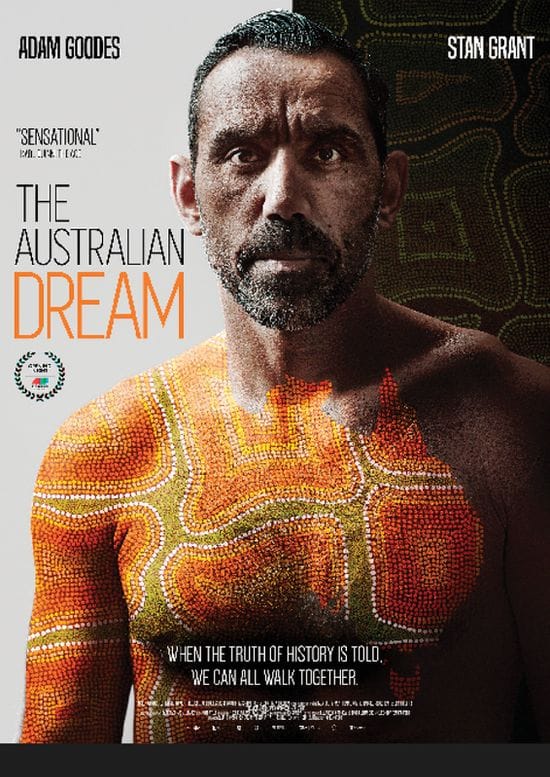 At the recent Justice Committee meeting it was resolved to recommend to you and your congregational members the new film now showing in select cinemas, The Australian Dream. Patrons to date have been few and far between and the movie could use our support.

From shy country kid to two-time Brownlow medallist and Australian of the Year, Goodes is an inspiration to many. The footy field was where he thrived; the only place where the colour of his skin was irrelevant. Goodes' world fell apart when he became the target of racial abuse during a game, which spiralled into public backlash against him. He spoke out about racism when Australia was not ready to hear the ugly truth, retiring quietly from AFL heartbroken.

Using the stunning athleticism of Goodes at the peak of his powers as well as the game itself as the film's backdrop, THE AUSTRALIAN DREAM prompts questions about Australia's relationship with racism and its ability to confront its own past. This compelling, provocative and cinematic film uses interviews from both sides of the debate to ask probing and fundamental questions about what it means to be Australian and what it takes for any individual to stand up for what they truly believe in. Featuring Goodes and all the key players from his story, including Grant, Michael O'Loughlin, Brett Goodes, Natalie Goodes, Tracey Holmes, Nova Peris, Nicky Winmar, Gilbert McAdam, Linda Burney, Paul Roos, John Longmire, Nathan Buckley, Eddie McGuire and Andrew Bolt, THE AUSTRALIAN DREAM is also a deeply personal and comprehensive exploration of Goodes' own journey which saw him retreat from everyday life only to return determined to rise above the ugliness he had been forced to confront.