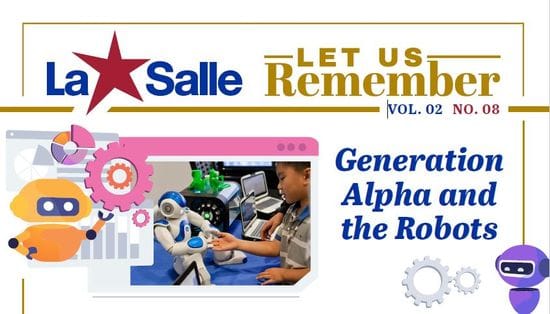 Next year the first members of Generation Alpha (born 2010-2024) will be looking forward to starting high school. Depending on which expert predictor wins out, they may well see in their liftetime the advent of Artificial General Intelligence, when machines achieve 'an ability to accomplish any cognitive task at least as well as humans' (Max Tegmark, Life 3.0).

We humans have been creative for a long time. There is evidence indicating that artefacts and rock-art found in Jinmium (north WA) are between 20,000 and 60,000 years old.

Closer to the present, in 1679, Denis Pepin, a French physicist, invented the pressure cooker.

In the same year, John Baptist de La Salle and the first Lasallians began developing together a new approach to meeting the educational, social and spiritual needs of boys whose working-class parents were often preoccupied with just surviving.

Since that time, Lasallians have seen technology, including educational technology, rapidly accelerating.

Ten years after De La Salle and two Brothers took over a school in Paris, the first practical steam engine was invented in England. The same Denis Pepin developed a later version. Its details were published in 1707, the year after the Lasallian community established a centre for troubled youth in Rouen, the forerunner of today's yourtown.