Posted by Merv McCormack on 22 February 2018 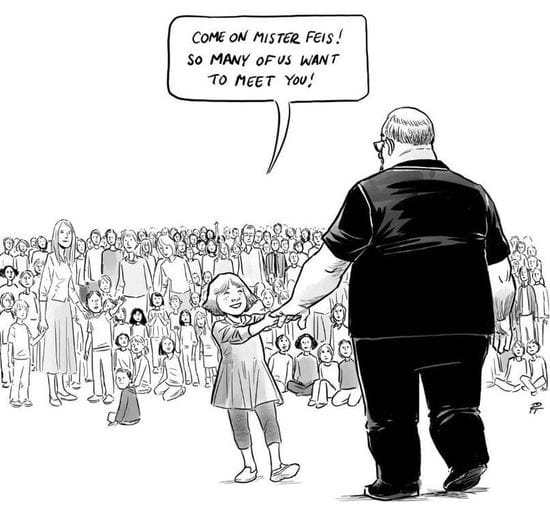 This bitter-sweet cartoon was given me by Amanda Proulx, our Assistant Director- Young Lasallians.

It is a poignant depiction of the ultimate sacrifice offered by Marjory Stoneman Douglas High School, Fla. teacher Mr Feis as he arrives in heaven, to be greeted by the hundreds of teachers and students who themselves have been past victims of gun violence.

Such a dreadful act of violence, such a tragic waste of innocent lives.

I have no idea who Mr Feis was, other than a respected assistant football coach, who also played a security role at the school. I don't know whether he ever saw himself as a likely hero. I doubt it, who does? But that is the legacy left to those children who he so bravely shielded.

The loss of his life was his final gift to the kids.

Wise words from St John Baptist De La Salle came to mind at such a time:

"Look upon those whom God has entrusted to you as his own children" (Med. 133.2), and "Young people need the light of watchful guides to lead them on the path of salvation" (Med. 197.3).

What an extraordinary act of love by Mr Feis, a magnificent 'watchful guide'.

I don't know if Mr Feis was familiar with the work of British philosopher John Stuart Mill. Perhaps not. But he faithfully enacted Mill's sage words:

"Let not any one pacify his conscience by the delusion that he can do no harm if he takes no part, and forms no opinion. Bad men need nothing more to compass their ends, than that good men should look on and do nothing".

May Mr Feis and the children Rest In Peace.