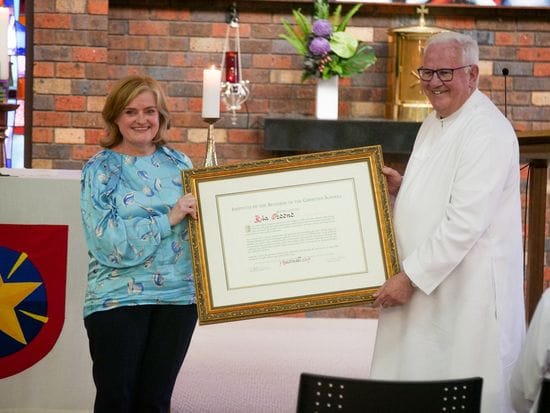 Affiliation is a formal recognition and acknowledgement extended by the Institute to someone who has supported the Brothers, not only through outstanding gifts and services but also through his/her professional and personal relationship with them. Ria Green has shown admirable commitment  over a number of years.

The Tercentenary Year of the Death of St John Baptist de La Salle (2019) was a significant occasion for the Institute during which many events have been held internationally, regionally and locally to mark this milestone in our history. Ria was at the forefront of the organisation of a number of these events having been appointed by Brother Superior to the Institute Ad Hoc Committee for the Tercentenary, being a driving force behind the Asia-Pacific Lasallian Educators' Conference and coordinating local Tercentenary events in the Melbourne sector of the District of Australia, New Zealand, Pakistan and Papua New Guinea.

However, Ria's close association with the Institute of the Brothers of the Christian Schools commenced well before 2019. She has been and continues to be an exemplary Lasallian in word and deed, modelling the values of Faith, Service and Community, particularly in her role as Deputy Principal. Through her years in leadership roles in two Lasallian schools (St Bede's College, Mentone, and prior to this at St John's Regional College, Dandenong), Ria sought to undertake  professional development and formation in Lasallian spirituality and pedagogy, which she applies admirably in the local context.

Ria's preparedness to contribute beyond the local school to the formation of Brothers and staff in the wider Lasallian Family is commendable. Within the District, Ria has been appointment to Vocations and Formation committees, her presence on and facilitation of retreats, and her involvement in workshops and meetings has added a specific lay person's dimension to the Lasallian Family. She has a particular skill in interiorising things Lasallian and sharing the practical implications with others in the Lasallian Family so that they may also be formed as Brothers, staff, students, parent s and board members.

Ria has also worked tirelessly to strengthen ties with the other Lasallian schools in Melbourne: De La Salle College (Malvern), St James College (East Bentleigh} and St John's Regional College (Dandenong}. This has included the coordination of opportunities for staff and students to join together in celebration, in formation and in prayer.

Over the past, thirty or more years, the De La Salle Brothers in the District of Australia , New Zealand, Pakistan and Papua New Guinea have been proactively sharing their charism with others and encouraging laypersons to take responsibility for the Lasallian mission and forming their colleagues. Ria is a fine example of an educational practitioner who has the skill and commitment to pass on to others what is essential for the Lasallian educational mission to continue to grow and flourish. This she has done so well in Melbourne,  as well as nationally and internationally, above and beyond her roles in Lasallian schools.