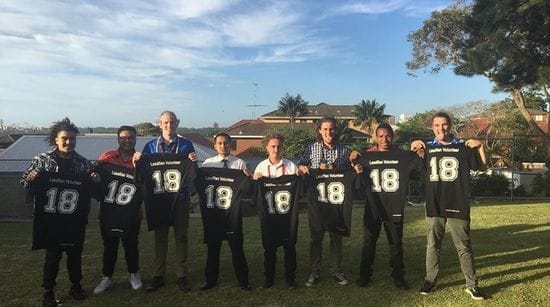 The Lasallian Mission Council honoured its 2018 Lasallian Volunteers with a celebratory Mass and Dinner on Saturday 8 December 2018 at The Centre, a heritage retreat and conference venue in Randwick, eastern Sydney.

Over 50 friends and supporters gathered at the end of a yearlong adventure to thank these eight generous full-time volunteers, who bravely spent a post-secondary year transforming the lives of the most underprivileged.

The debrief assists Lasallian Volunteers in the considerable transition back to home life after the energy and action of their year of service.

The painting theme was sustained and developed with activities and presentations revolving around painting as an analogy for the development of character and identity.

Each volunteer had the opportunity to share their story on the group and consider how they had grown, as well as potential challenges in the next stage of life.

Significant artworks would focus their attentions for different workshops.

Joel Harriss was himself a 2017 Lasallian Volunteer at La Salle College, Middle Head, Perth, went through previous debrief formation sessions and could share from his knowledge of navigating these formative years and experiences.

"He did phenomenally well in facilitating the program," Amanda Proulx told Lasallian Outlook.

"His personality and natural gifts made him perfect for the program. He really stepped up to the plate and did a great job."

Lydia Avia-Aumua, a Learning and Development Consultant came from yourtown's Brisbane offices, came to present a workshop on self-care, such as managing mental and physical health.  Lydia also spoke at the Lasallian Volunteer induction in January when they underwent a week-long

induction program in Sydney covering their roles as Lasallian volunteers, the importance of prayer and reflection and child protection legislation.

The volunteers were honoured with a farewell Mass celebrated for their intentions by the Parish Priest of Randwick, Fr Peter Hearn MSC and by the presence of senior leaders in the Lasallian family, including Br David Hawke FSC, Brother Visitor of the De La Salle Brothers District of Australia, New Zealand, Pakistan and Papua New Guinea and Mr Merv McCormack, Executive Director of the Lasallian Mission Council.

Each Lasallian Volunteer was recognised as a wonderful representative of their families, schools and countries.