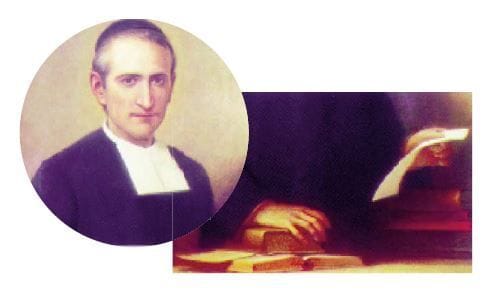 Brother Miguel came from an upper middle class family in Ecuador, a family that did not appreciate the idea of one of its family members going off to join a religious Institute dedicated solely to teaching. This, they thought, would not allow him to follow a prestigious church career and would even exclude him from following some other honorable ca-reer such as that of a magistrate or a civil servant or a career in the army. His vocation as an educator began on the benches of the first school that the Congregation opened in Ecuador, thanks to the beneficial daily con-tact that he had with his teachers.

Brother Miguel was endowed with uncommon intelligence and wis-dom He understood the importance of education and decided to dedi-cate himself to it with all of his energy and without hesitation. "My mis-sion needs two organs - Mother Teresa used to say - hands for serving and a heart for loving." In Brother Miguel's case, the "hands" were his extraordinary intelligence and his incredible capacity for work, including his full time teaching and at all levels. From the primary grades to higher classes, from military academy cadets to catechism in first communion classes, he succeeded in amassing a vast culture and in producing a con-siderable number of publications and textbooks (over a hundred titles) which were used not only in Ecuador but also in other Latin America's countries. He lived completely for God and for his students. Roberto Espinosa, the esteemed Ecuadorian professor, wrote: "Brother Miguel has been the best promoter of education in Ecuador, as a teacher, a headmas-ter and a writer."1 His cultural and pedagogical contributions earned him membership in the National Academy of Ecuador and a Fellowship in the Royal Academy of Spain - this was on August 2nd 1892.

On that occasion he gave an Inaugural Lecture entitled "The influ-ence of Christianity on morals, on the sciences, on letters and arts." From the theme that he chose for his inaugural lecture, one that would introduce him to his colleagues and to the academic community of his country, he showed who he was. Having learned the art of talking with God, he spoke of God and in the name of God! "This spontaneous and candid man, whom so many people everywhere missed, offers himself to you as a possible example of spiritual experience of undoubtable val-ue and of great attraction, inviting you above all to love, because before being anything else, Brother Miguel was in love with God and with hu-manity, God's own image."2

The canonical process started by the diocese of Cuenca on January 19th 1925, led to his beatification on October 30th 1977 and later to his canonization on October 21st 1984.

We celebrate his liturgical feast on February 9th.

Father, may the prayers and example of Saint Miguel help us to see what is praiseworthy in others and be of encouragement. Help us to discover your will for us and live simply in the ways of the gospel. We ask this through Christ our Lord. Amen.