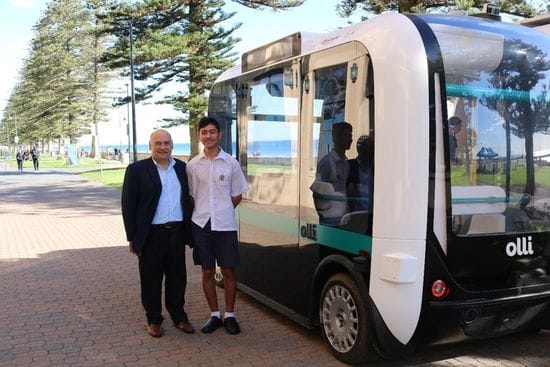 When Mohammad started his Year 12 Research Project, he didn't expect it turn out like this.

Mohammad was born in Iran and has lived in Australia for five years; he commenced his schooling at St Michael's College in Year 9.  With the current media attention focussing on Autonomous Vehicles and Mohammad's keen interest in the topic, it was obvious for Mohammad to focus his Year 12 Research Project question on "To what extent is autonomous driving currently being used and how much has it impacted on society?"

Mohammad's Research Project couldn't have been timed better with Olli; a 3D printed, Autonomous Vehicle created by Local Motors currently being trialled in Adelaide, travelling from Moseley Square to the Broadway Kiosk. Local Motors, founded in 2007, is a ground mobility company with a belief in open collaboration and co-creation. Its parent company, LM Industries, is the world's first digital vehicle manufacturer and sister company, Launch-Forth, invites more than 200,000 community members to participate in challenges by submitting ideas on its crowd-powered software.

Why Adelaide? South Australia is one of the more progressive states in Australia with Local Motors winning a grant to conduct a six-month trial. The trial is gathering vital information on rider acceptance of Autonomous Vehicles and how it can assimilate with pedestrians. Olli is also an experience; it has cognitive features and responds to voice commands, providing information on weather, recommends restaurants etc. It is also of great assistance to those with disabilities.

When Mohammad reached out to the Australian and Asia Pacific representative, Rafael Toda, it turned out that Rafael is actually an old scholar of St Michael's College from the Class of 1975. A bond was immediately established between the two which lead to Rafael inviting him and some other keen St Michael's students to trial Olli.

Rafael arrived in Adelaide from the Philippines in 1972. After receiving a Lasallian education in the Philippines, there was no question as to where Rafael would be continuing his education. Rafael has worked for Qantas and also for dual listed (ASX and NADAQ) OzEmail Internet and America Express. Today Rafael is the Business Development Lead for Local Motors in Australia and the Asia Pacific Region based in Queensland. Rafael says "It is very heartening to see schools recognising these mobility trends and encouraging students to think about how this would impact on their lives in the future. It becomes especially gratifying for an old scholar like me when one of those schools is my own."

St Michael's College is proud to acknowledge the sense of community that it has built over the years and the willingness from our old scholars to ultimately benefit and assist our students of today.

Year 12 student Mohammad was very grateful for Rafael's quick reply to his email and answering his various questions. Mohammad stated, "Riding on Olli with Rafael was a great experience and I gained excellent information about how automated transport could impact on society. In particular, it was interesting to learn that Olli has features to support blind passengers with its voice interaction. The information will be very valuable for my final report."

Some high-level facts about the future: