Home >  Blog >  Simon Opu: "If you think and feel that God is calling you to religious life, do not reject it, but go for it!"

Simon Opu: "If you think and feel that God is calling you to religious life, do not reject it, but go for it!" 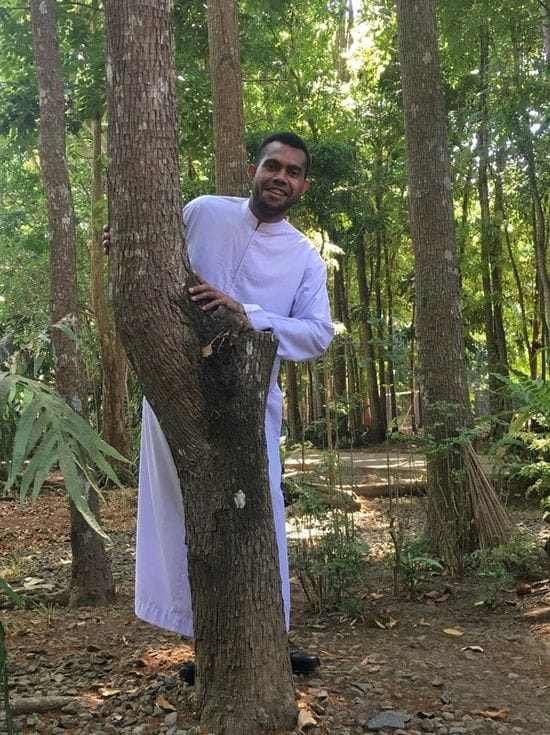 Brother Simon Opu FSC took his First Profession of Vows at the Brothers' Community chapel at Bomana on the 16th of August. Br Simon did completed his postulancy and novitiate in the Philippines with other Brothers from the Asia Pacific Region. Simon hails from the Central province near Port Moresby.

The ceremony was attended by the Brothers from the Hohola and Bomana Communities and Simon's close family and friends who came from the village near Bereina in the Central province.Br Paul Toohey put together a prayerful liturgy which was celebrated by Fr John Glynn AFSC, chaplain of Jubilee Catholic Secondary School.  He reflected that given the challenges of today's modern world, the decisions taken by Brothers Simon, Sajawal and Gulfam to take vows in the religious life is a courageous act.

Our two Pakistani Brothers, Sajawal and Gulfam who arrived a week earlier also renewed their temporary vows in the same ceremony. This enhanced the ceremony and all present were overjoyed to witness the three of them pronouncing vows together.

Brother Simon first met the Brothers at Mainohana Catholic Secondary school as a student where he became interested in the Brother's life. As his interest grew, he kept in touch with the Brothers after he graduated. He attended Mt Hagen Technical College and graduated with National Certificate One in Motor Mechanic and Light Vehicle Service.

Antony Swamy offered Br Simon a teaching job at La Salle Technical College Hohola in 2015. This opportunity reconnected him with the Brothers and later had a live-in experience at the Hohola community.

Simon is assigned at the Bomana community and is studying at the Catholic Theological Institute (Seminary). He is looking forward to this experience and will make the most of it.

My name is Simon Peter Ame Opu, and I was born in Inawi Village, Kairuku District, Papua New Guinea. I was first introduced to the Brothers when I attended Mainohana Secondary School as a student. After school, I attended College in Mount Hagen and graduated with a Certificate in Automotive, specialising in Light Vehicles.

In 2015, after advice from my sister, Louisa Opu, I applied for a teaching position at La Salle Technical College, Hohola.  After my interview, Br Antony Swamy (Principal at the time), offered me a position as an Automotive Technical Teacher. I loved being in the classroom and engaging with the students.

The passion and the commitment of the De La Salle Brothers to the young, especially the poor, was something I thought was extraordinary and inspired me to be a part of. My desire to join the Brothers grew stronger and deeper when I met Br Ken Kalinowski, an American Brother, who has been a great mentor to me.

Living the life of a Religious Brother has taught me to be an active consecrated person, to serve others who trust and believe, and lead them to salvation. My journey as a Novice has led me to better understand God and prompted me to grow personally. Along my journey, I have met a lot of Brothers who have inspired and motivated me to be the person I am today. These Brothers have encouraged me to love and serve our Lord Jesus Christ and follow in the footsteps of our Founder, St John Baptist de La Salle.

I personally want to thank my Novice Master, Br Rey Mejias, who has guided me during my Novitiate. His knowledge, creativity and innovation have helped me evolve in my Ministry. During my formation, I have tried my best to learn as much as possible on Christian and Lasallian studies; I believe it is important to be matured in two studies in order to have a strong foundation in the mission.

As I continue my journey to the next stage of my life, I pray that the spirit of God will lead me to continue to inspire and serve others. The life of a Brother is such a marvellous way to praise and glory God.

The special mission of education which our Founder St John Baptist de La Salle adhered to was very positive in breaking the patriarchal mindset of others. Lasallian education is not just an education but rather an education to bring change to society - an education that is creative, smart and innovative in many ways.

I would like to invite those who are thinking about becoming a part of this community to seriously consider religious life through the De La Salle Brothers. As the saying goes "if you think and feel that God is calling you to religious life, do not reject it, but go for it how would you know if this is God calling you!" The only answer is to try it; if only you try, then you will understand what God wants you to do.

Live Jesus in our hearts forever!

Terminology
Novitiate: The period of training and preparation that a member of a religious order undergoes prior to taking vows in order to discern whether he is called to vowed religious life. It often includes times of intense study, prayer, living in community, deepening one's relationship with God, and deepening one's self-awareness.