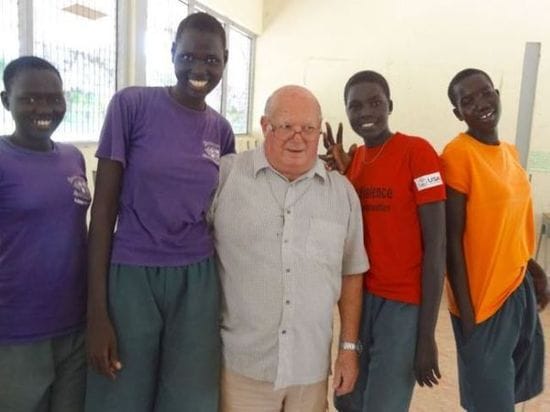 Last week I was in Wau for the Board meeting of our Catholic Health Training Institute. Sr Alice a South Sudanese Sacred Heart Sister was also there for the meeting. I was invited by the students for a meeting that lasted an hour and half where there a few suggestions made for improvement but where the obvious global feeling was one of appreciation for the opportunity they were receiving and gratitude to Solidarity with South Sudan and its supporting donor/partners.

In the early years of the CHTI, it was difficult to find enough qualified, secondary graduates wishing to train to become registered nurses or mid-wives. Three years, full-time, residential appeared as a formidable challenge even if most could go home for a home vacation once each year. Now, ground transport limitations and the high cost of airfares makes that impossible. So most students are assisted to come at the beginning and to depart at the end after graduating, but there are no annual holidays home. The CHTI has built an excellent reputation as the outstanding health training provider in South Sudan. Consequently, for 2019, there are more than 300 applicants for 40 places. Our graduates are filling increasing numbers of positions of responsibility throughout South Sudan and the Nuba Mountains. Notwithstanding the last five years of conflict, our enterprises have flourished beyond reasonable expectations. Likewise, our Teacher Training College in Yambio, our sustainable agricultural project in Riimenze and our various pastoral programmes are making an impact beyond what we could have reasonably expected.

Of course, you never know what to expect in South Sudan. Sr Alice returned from Wau last Friday to find that a young mother had left her two-year-old son for the Sacred Heart Sisters to look after. The mother left a note written in Arabic, saying that the boy's name was Stephen and also provided some phone numbers. The boy appeared quite healthy and well cared for. Alice prudently reported all this to the police and provided the short-term care required. She also rang the phone numbers who were relatives of the mother. They have since come to say they would look after Stephen but had no idea that the mother would do this and they have not seen her since last week. So sad that a mother should feel so desperate! One of the hardest things here is hearing the tales from gaunt looking women who are struggling to feed their children.

Another fine-looking articulate young man, educated by the Comboni Missionaries, whom I have met several times, came seeking help to return to his village. 'I cannot provide for my wife and two children here', he said. He can't get a job. Back in the village he can farm and build a tukul in which to live. In the village, he can collect wood to burn rather than pay more than 2000ssp for a bag of charcoal. Accommodation in Juba is now too expensive for most. Survival is easier in the bush areas if the area is secure enough and not subject to illegal raids by rebels or Government soldiers.

What do we think of the recently signed peace agreement? Well, it will be a very good thing if those who signed it keep to their words; but rather than simply Government and Opposition, there are many rebel groups who were not at the 'peace table' and who may wish to perpetuate the low level of law and order. Bluntly, no-one really knows what to expect. I suspect the motivation of too many people continues to be what is good for the individual more than what helps people generally. There are still many hungry people wondering what future there is for them in this country. How many women out there are experiencing similar desperation to the mother of Stephen?

The agreement was 'one step forward'. We hope and pray it is not followed by 'two steps back!' This is the land of the unexpected. Maybe the unexpected can be good for a change.