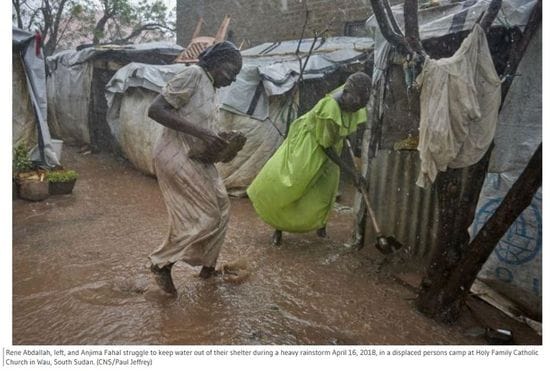 There is reason aplenty to be pessimistic about the situation in war-torn South Sudan.

But is there any reason to be hopeful?

Last week, the country's Roman Catholic bishops affirmed the pessimism in a pastoral message that was as much a warning about the latest peace agreement signed by warring parties as it was a policy recommendation to the nation's leaders.

"The 'peace' which is being spoken of is not a true and lasting peace," the bishops said in a pastoral message at the conclusion of a two-day meeting that ended Feb. 28 in the capital of Juba. "We fear that this peace agreement is fatally flawed in itself and cannot bring true peace; we fear also that the current leadership does not have the will to implement peace."

The latest agreement, signed in September between President Salva Kiir and opposition leader and former Vice President Riek Machar, shows signs of unraveling, the clerics declared, with all parties in the conflict "involved either in active fighting or preparations for war."

The September agreement was the latest in a series of pacts to try to end a civil conflict that began in 2013, two years after South Sudan became independent of Sudan, and which has killed about 400,000 persons and displaced millions, many to neighboring countries such as Uganda.

I had just finished interviewing a North American Catholic sister with long ties to South Sudan when the news of the pastoral letter was released.

She called the letter "a remarkable document" and a rather "bold" statement for this group of bishops. One of the signees, Auxiliary Bishop Santo Loku Pio, has not been shy about discussing the war and the role of the South Sudanese government has played in it, saying "the people are suffering as a result," he told me during an interview in May 2017 in the capital of Juba.

Last week, Loku Pio said very little in response to my emailed queries about the situation in his country, probably because the statement he and other clerics signed was just being prepared.

The document has a dire prophetic edge to it: "The value of human life and dignity is forgotten as human rights abuses continue with impunity, including murder, rape, widespread sexual violence, looting and the occupation of civilian land and property," the bishops said, adding that organized crime appears to be on the increase.

Murder, rape, widespread sexual violence and looting it's no wonder that concern about security is a paramount among those who work or have traveled to South Sudan, and it's why I agreed not to identify the sister I interviewed.

I asked her about her take on earlier reports by the United Nations assessing the situation reports that basically presaged the bishops' assessment.