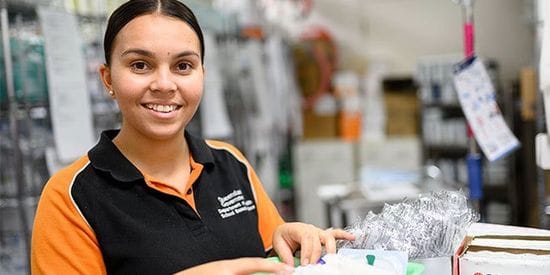 From the Kamilaroi people in Mungindi, overlapping NSW and Queensland borders but with a NSW postcode, Shaunah was named Queensland's Aboriginal and Torres Strait Islander Student of the Year.

She also gained the support of State Member for Murumba Steven Miles who nominated her for Moreton Bay Regional Council's Young Australian of the Year.

"Shaunah lives the five core principles that we are guided by in our Lasallian tradition," he said.

"She models for us how to create an environment that respects inclusion, strives to be the best person she can be and is a wonderful person who makes an impact on everyone she meets."

Mr Corfield acknowledged the 2019 graduate's "fair share of tough times" where she had "shown strength to come back after being knocked down".

Moving to Brisbane's outer north aged 15 years, to live with cousins, Shaunah said other schools were not able or willing to enrol her and SCCC, its caring community, structure and leadership were her saving grace.

"I couldn't get into other schools and then a family friend suggested the Indigenous program at Southern Cross (Catholic College)," she said.

"The school have been so amazing."

The group supporting Aboriginal and Torres Strait Islanders at SCCC is called Garranyali.

From her initial enrolment interview, to constant help with fees, uniforms and other expenses, to the completion of a traineeship as an Assistant in Nursing (AIN) in Years 11 and 12, Shaunah believes more than ever in herself and the future.

Her goals and motivations are based on lived experience.

"When I was a teenager, I started to get off track," the SCCC graduate said. "I wasn't focusing on school.

"I've seen people not able to get far, stuck in a dark hole, it's like a spiral of negative choices and poor health.

"(But) I was strong enough to get myself out. I wanted a change."

Shaunah is motivated to "make a change out there" too.

"Many in my community aren't focused on health, they don't know the dangers and what can happen," she said.

"Educating them about health and well-being is important to me, about the damage of drugs, alcohol and poor hygiene.

"When they don't finish school, they don't have anyone to tell them."

Shaunah spoke of her interest in motivating others to "being open with doctors".

"I know many people who don't like going to doctors and talking about what's wrong with them," she said.