Posted by Jordan Grantham on 17 October 2018 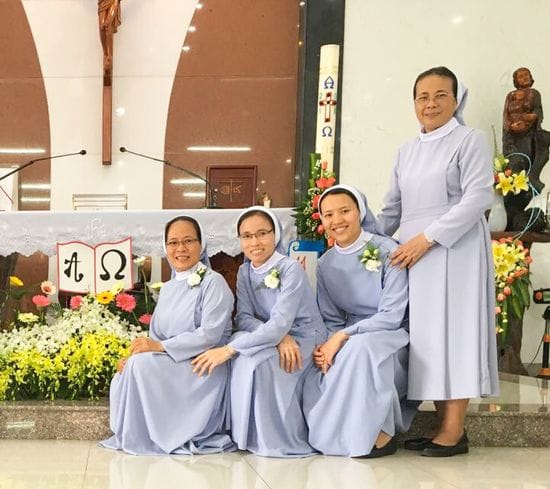 One of the few La Salle Sisters in Australia has made her perpetual profession.

The La Salle Sisters were founded in 1966 during the Vietnam War, initially to care for abandoned children.

The youngest of nine children, Anna entered the convent when she turned 20 years old, having decided to enter religious life when she was 18. One of her brothers is a Benedictine monk.

Religious orders typically have three vows - poverty, chastity and obedience but Lasallians have two additional vows, of uniting with the religious order and accepting any assignment they are given in order to serve the poor through education.

"That's a big commitment, we say," Sr Anna said with a smile.

She was in a group of seven sisters who took final vows in the Our Lady of the Stars Chapel of her order's motherhouse.

Six sisters took first vows and five sisters renewed their vows after 25 years in the convent.

Sr Anna was joined by 40 friends and relatives for the special occasion.

Sr Anna graciously extended an invitation to Assistant Director of Formation (Young Lasallians) Amanda Proulx to attend her profession, and Amanda happily was able to be present at the ceremony to represent Sister Anna's teammates at LMS.

"It was an incredible honour to be present and to support Anna in prayer at this milestone in her life and vocation," Amanda reflected after returning to Sydney.

"She is a beautiful witness to our Team and to all of the young people with whom we work of the vocation of La Salle Sisters and of fidelity to our shared Mission."

There are over 150 La Salle Sisters with around 70 sisters in the Ho Chí Minh district.

This is Sr Anna's third year in Australia and her ministry has seen her teaching catechism across several Vietnamese communities and working on youth resources in the Lasallian Mission Services team.

Growing up in the countryside of Yen Thanh, she witnessed the resilience and devotion of Catholics who have often suffered persecution.

"In the countryside the people were very strong in their religious lives," she said.

"They worked to have a good life, socially and religiously."

A story from her school days demonstrates her hometown's deeply held devotion to Our Lady. The local people of Bao Nham sheltered in the mountain central to their village to survive persecutions, crediting an apparition of Our Lady and renamed the mountain in her honour.

Sr Anna has committed herself to a way of life that requires serious dedication.

The La Salle Sisters in St Benildus Convent, Bankstown then pray the first part of the Liturgy of the Hours, known as Morning Prayer, followed by meditation, cooking and morning Mass at St Felix de Valois Church, Bankstown. They pray the Rosary individually during the week and in common on weekends. They also pray in the afternoon and in the evening.

Sr Anna advises young people who may be discerning a religious vocation to be courageous and committed.

"Choose for you an ideal to follow Jesus and become holy day by day. That is a call from Jesus. Jesus says 'become holy like my Father in Heaven'.

"The Church needs you, needs your commitment to serve each other, loving and sharing," she said.

Some of her personal patron saints are St Peter and St Teresa of Calcutta, who both exemplify service and love.

"Give your hands to serve and your hearts to love" is one of St Teresa's sayings that Sr Anna frequently recalls.

"I really admire him for that," she said.

"Some people have a great devotion to Our Lady but for me it's St Peter. I also admire St Joseph. He is really humble - he didn't say anything."

The silence of St Joseph is a consolation to Sr Anna during her long and sometimes difficult English studies.

For recreation, Sr Anna enjoys reading and listening to music. Her favourite books are the Gospels, historical works on Israel and spiritual writers including Henri Nouwen, Anthony de Mello and George Kaitholil. Her favourite musicians include Trinh Cong Son and Dinh Cong Huynh.