Home >  Blog >  Sr Anne 'a significant leader in the Church'

Sr Anne 'a significant leader in the Church' 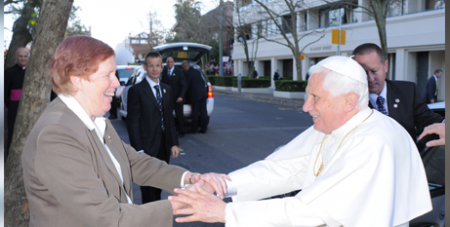 Sr Anne died peacefully at the Mater Hospital in North Sydney on June 23. She was 69.

Sr Monica Cavanagh RSJ, the congregational leader of the Josephites, said: "Sr Anne's contribution to the congregation she treasured, and to religious women and men across Australia through her presidency of Catholic Religious Australia, impacted in significant ways on the lives of many religious congregations and individuals."

Br Peter Carroll FMS, president of CRA, said: "It is noteworthy that in the year of the canonisation of the first Australian saint, Mary of the Cross MacKillop, Anne Derwin, as leader of Mary MacKillop's congregation, also took up the important leadership role as president of CRA.

"Sr Anne was a significant leader in the Church in so many ways a woman of compassion, gifted in her capacity to bring people together, dedicated to the mission of God."

Sr Anne joined the Sisters of St Joseph 50 years ago and trained as a teacher of mathematics, science and religious education.

She spent six years as provincial of the New South Wales province and moved on to the directorship of St Joseph's Spirituality and Education Centre, Kincumber South. She then undertook the management of Mary MacKillop Place, North Sydney.

In 2007, Sr Anne was elected congregational leader of the Josephites. While in that role, the Sisters celebrated the canonisation of St Mary MacKillop in 2010.

Archbishop Mark Coleridge, president of the Australian Catholic Bishops Conference, said the bishops in Rome for their Ad Limina Apostolorum visit were saddened to hear of Sr Anne's death.

"With her dignity, strength and calm, she was a key figure in bringing the canonisation of St Mary MacKillop to completion. In so many ways, Sr Anne was a true daughter of the saint, one of the great Josephites. May she rest in peace and rise in glory," Archbishop Coleridge said.