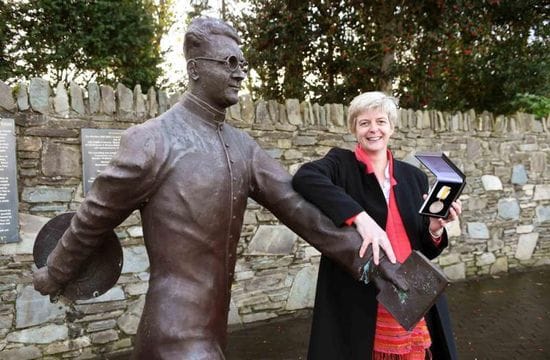 A Catholic nun engaged in the education of girls in South Sudan has been honoured with an award for her work at the US department of State in Washington DC.

Sr. Orla Treacy, a native of Ireland, received the 2019 International Women of Courage Award along with nine other women from around the globe.

Three women from Africa were among the recipients of the 2019 award.They include Anna Aloys Henga from Tanzania, Mama Maggie from Egypt, and Moumina Houssein Darar from Djibouti.

The annual award honours "women around the globe who have demonstrated exceptional courage and leadership in advocating for peace, justice, human rights, gender equality, and women's empowerment, often at great personal risk and sacrifice."

Since its inception in March 2007, the US State Department has recognized more than 120 women from over 65 different countries around the world.

The 2019 award was presented to Sr. Orla and nine others by the US Secretary of State Mike Pompeo and the US first lady Melania Trump.

A member of the Institute of the Blessed Virgin Mary, popularly known as the Loreto Sisters, Sr. Orla, 46, has been in South Sudan since 2006 when her religious congregation initiated the boarding secondary school for girls in the Catholic diocese of Rumbek.

She was nominated for the award by the De La Salle Brothers through the US Embassy to the Holy See.

Ministering in an African context where families force their girls into early and arranged marriages are and where the education of girls is not a priority, Sr. Orla has spent considerable time challenging this culture.

In the January 2019 Loreto Rumbek Newsletter, it is indicated that over 52% of girls in South Sudan "are married prior to their 18th birthdays (and) as many as 17% report being married before turning 15."

In a message shared with CANAA ahead of the award, Sr. Orla said she was humbled to be receiving the award.

"This award belongs to the young women of South Sudan with whom I have the privilege of working," she shared and explained, "Our students embody all that is courageous they are young women of vision, strength and hope; young women who dream of a better country for themselves and their families, who are prepared to challenge old structures and work toward making South Sudan great."

In the same message, Sr. Orla expressed gratitude to those who have supported her ministry in South Sudan.

"I am grateful to all who have made this possible," Sr. Orla stated in reference to the award and added, "Our work in South Sudan is not possible without the ongoing support of our partners, our wider Loreto family, past pupils, students, staff and our local community in Rumbek."

The Loreto mission in Rumbek has "a thriving secondary school for more than 300 girls from all over the country, a local primary school for boys and girls, and a health care unit, with a focus on vulnerable women and children," reads the statement from Loreto Rumbek shared with CANAA.

There are 3 Loreto Sisters working in the mission from Kenya, India and Ireland, who partner with many other missions in the area through the local Diocese of Rumbek, including the De La Salle Brothers.

For more information about Loreto Rumbek and the young women of courage that this mission supports, please visit www.loretorumbek.ie.