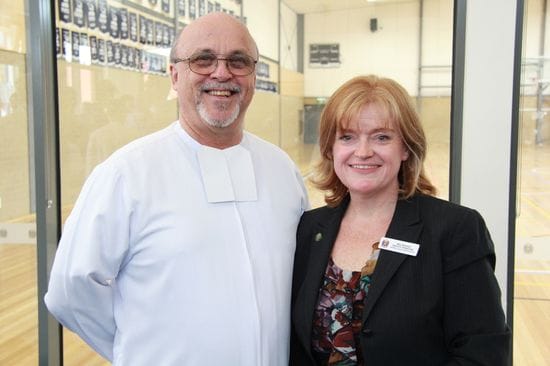 Congratulations to the Deputy Principal of St Bede's College Mentone (Identity, Community and Action), Ria Greene who has been appointed to a new commission, overseeing the planning of commemorations to mark the 300th anniversary of the death of St John Baptist de la Salle in 2019.

Ria has been a committed Lasallian for many years, playing a pivotal role in religious education both at St Bede's and at her old school, St John's College in Dandenong.

She has also made an invaluable contribution to the broader Lasallian family through coordinating formation programs for teachers in Melbourne and through her involvement with the Formation Committee of the Lasallian Mission Council.

2019 has been declared the Year of Lasallian Vocations and the General Council in Rome has created an Ad Hoc Commission to shepherd the planning process.

Ria has been personally invited by the Superior General of the De La Salle Brothers, Robert Schieler to represent the Pacific Asia Regional Council (PARC) on the Ad Hoc Commission.

Ria said she was honoured to have been selected as a member on the new commission.

"My connection to the Lasallians stretches back to when I entered Year 7 at St John's and it's an absolute honour to be accepted into this role, particularly given the strong pool of talent that exists in the Lasallian family", she said.

Ria's strong background in religious education includes time as a team leader at the Catholic Education Office in the Archdiocese of Melbourne, coordinating professional development programs for teachers.

She will be travelling to Rome in September for the Commission's inaugural meeting at the Generalate as preparations begin to mark the tercentenary in 2019.

The Ad Hoc Commission will be responsible for organising and coordinating the tercentenary celebrations across the various regions of the Lasallian family.

Ria said one of the greatest challenges in the role will be to ensure that the celebrations in our PARC region truly capture its great cultural and religious diversity.

"That can also work in our favour, by allowing us to mark the event in a more creative way than perhaps would be possible in other parts of the world", Ria explained.

The Lasallian family joins together in congratulating Ria on her appointment which is a fitting reflection of her outstanding contribution to Lasallian education in our District.