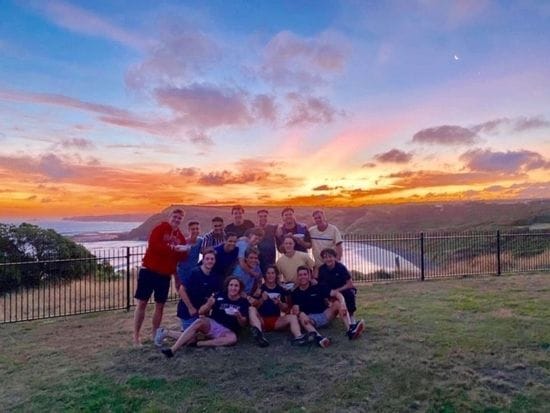 In preparation for the 2020 school year, the St Bede's College Student Leadership Team, consisting of our School Captain, Vice Captains, four House Captains and their respective Vice Captains travelled to the St. Bede's College Cypress Lodge in Phillip Island. On the bluff dividing YCW and Smiths beach, we returned to our newly renovated facilities, admiring a view that could never cease to amaze. Upon arrival, we immediately made our way down to the beach, taking surfboards and boogie-boards, yet underestimating the sheer power of the waves. With boys, boards and limbs flying everywhere, we retired back to the lodge for lunch and a 'get-to-know-you' session. Leading with a very, very hot seat, Mr Jones provided some very direct and probing questions, catching the boys off guard. Yet, ultimately, the boys embraced the opportunity to open up and discuss some personal views, goals, and aspirations for the year ahead. Some common themes present included bridging the gap between junior and senior years, mental health awareness, inclusivity, and ensuring students were enjoying their time at school.

Next, Mr Beaumont challenged the boys to a team bonding exercise called 'Survival'. We were provided with a hypothetical scenario that placed us in a post plane crash setting in Northern Canada, similar to that of the TV Series, 'Lost'. We were provided with a list of salvaged items that we had to prioritise in order of most important for survival to least important. It was challenging at first to decide on how we were to each communicate our ideas and opinions, but we agreed on a 'hands-up' and courtesy method, that was well respected. Our first challenge was to decide on whether to stay at the crash site, or leave and look for assistance. We oscillated between the ideas of staying or leaving and in a 'Twelve Angry Men' type outcome; we ended up flipping from a majority vote to leave, to a majority vote to remain at the crash site. After this decision was made, it was easier to prioritise our items. Ultimately, we did not correctly guess the exact recommended order, yet our ideas and the thought process was quite accurate. Therefore, we were content with our efforts.

At the conclusion of the game, our House Coordinators arrived and we separated into our respective houses to discuss our hopes and goals for the upcoming year. We returned as a group and shared our ideas collaboratively, which were heavily centred on inclusivity and providing means of support for students. Notably, one of our most popular ideas involved an online survey that allowed students to evaluate their current mental wellbeing, and this would allow teachers to act on the results as required, providing a support system for students who potentially do not otherwise know where to seek help.

After this, we returned to the beach for some ultimate Frisbee, before returning back to the lodge and greeting our College Principal, Mr Finn. Mr Finn discussed what he valued in a successful leader, and provided us with some insight regarding his hopes for the upcoming year. For the leadership team, our greatest message that we took away from this discussion was to "be the verb, not the noun". In other words, we had already received the title of a 'Leader' (the noun); yet now it is time to begin doing. For dinner, we went into Cowes and an order of 16 Parmas was made.

The second day was heavily focussed on creating a plan of action for our year ahead, and we held our first official leadership meeting. We recognised Mission Action Day fundraising and organisation as our first priority, discussing and delegating different roles regarding activities for the day, and a plan of how we were going to encourage students to get involved. We concluded on a positive note, summarising our primary goals and aspirations for the year ahead, with particular focus on mental health, inclusivity and sustainability.