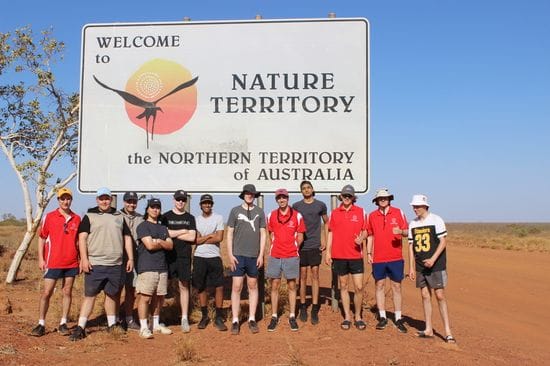 Recently twelve students and four staff members from St James College East Bentleigh travelled to remote Western Australia, for the 2019 Balgo Immersion Trip. After departing Bentleigh East on a cold morning, arriving in sweltering Balgo some 36 hours later was initially quite a shock. I commend the twelve students who gave up their own time to spend ten days in a completely different environment, living out their Lasallian call to serve.

The boys quickly adjusted to Balgo, a remote Aboriginal Community in WA. Whilst in Balgo, the boys assisted at Luurnpa Catholic School, helping the students in all facets of the school life. The students fully immersed themselves in the school culture, with some students going on excursions with classes, others assisting with Breakfast Club, running sports activities and helping individual students with their work. On the final day at school, there was a school Footy Day, filled with fun activities and sports games, whereby the students were split into four different teams to participate in a round-robin competition. The St James students and staff were warmly acknowledged at the end of their time at the school, with the Principal and staff expressing their gratitude all that the students did.

The boys were also fortunate enough to do some sightseeing around Balgo. The students frequented 'The Pound' which is all that remains of an inland sea that once existed. The Pound provides breathtaking views, stunning sunsets and incredible stargazing at night. The students also travelled with some community members to the Rock Art, a site of ancient rock art dating back many years. Once we were there, one of the elders shared a Dreamtime story of how this part of the land and the rock formations were created. We followed her and several of the accompanying staff down into a ravine and we followed them into a dried-up waterhole with some art on the walls. We were fortunate enough to be shown how to gather and eat some bush tucker, including bush coconut and bush honey, which we helped the local members gather. As a group we also visited Warlayirti Arts Centre, the local Art Centre. We were given a tour and shown plenty of Aboriginal art painted by the elders of the community and were fortunate enough to see some of the locals painting in the studio. We were shown various cultural artefacts, including spears, baskets and boomerangs. Many of the boys purchased works painted by various community members. While we were in Balgo we went out to the basketball courts to spend time with the local kids. As the days were so hot, the locals waited until night time and all flocked to the basketball courts. We played basketball with some of the older boys and girls while the younger kids enjoyed playing footy around the courts. By the end, the students would be running out to greet us and were thrilled we were there.

On the Saturday night in Balgo, we attended Mass where they were celebrating the First Holy Communion of some of the students. The nature of the mass was very relaxed, peaceful and welcoming, especially when the locals were praying for family members. The songs were like nothing we had ever experienced. Singing to the rhythm of an Elder using clapsticks, these songs were partly sung in English and partly Kukatja. The highlight of the mass was when we received a blessing from the locals; from this blessing, you could tell that they appreciated our efforts and made us feel extremely welcome.

It was clear that by the end of the trip, the presence of the students was very much appreciated and valued by the community and children of Balgo. The impact these students had and their willingness to get involved and learn about the people, culture and community of Balgo was impressive. All of this, of course, couldn't have been done with the assistance of Ms Kaye Longhurst, Mr Martin Callanan and Mr Andrew Davis. I thank these people for their help and the value they added to the trip. I would also like to extend my sincerest thanks to the community of Balgo and staff members of Luurnpa Catholic School, who were extremely welcoming and accommodating. The students certainly gained much from their interactions with the Luurnpa Staff and students.