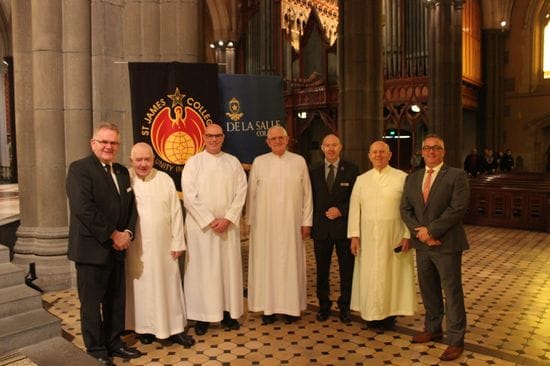 Oe Heart, One Commitment, One Life

On a bright and beautiful autumn morning full of sunshine and with just the hint of a chill in the air, all students and staff from St James College, travelled into St Patrick's Cathedral in the city of Melbourne on Friday 17th May, to celebrate our very special Tercentenary Mass. We were very fortunate to have as our main celebrant for this occasion, the Most Reverend, Peter Comensoli, Archbishop of Melbourne. The mass was concelebrated by canonical administrators of the College, Father Jacob Ragu and Father Brian Collins. We were also joined on this extraordinary occasion in the Cathedral by Year 9 students and staff from the three other Melbourne Lasallian schools. In what was a simultaneous expression of faith and celebration, masses were held concurrently across Melbourne at 10:30 am as the festivity of our Lasallian identity and charism echoed across the city.

In his homily, Archbishop Comensoli compared the life of St John Baptist de La Salle to that of St Timothy, whose second letter from St Paul was heard during the Liturgy of the Word. St Paul wrote to Timothy "You have been trusted to look after something precious; guard it with the help of the Holy Spirit who lives in us." (2 Timothy 13-14)

The Archbishop extolled the zeal of Timothy who chose to forsake his country, his house, and his parents, to follow St Paul, and to share in his poverty and sufferings. Archbishop Comensoli reminded us all of the parallel story of St John Baptist de La Salle who forsook his own life of privilege and wealth in order to provide a human and Christian education for the poor and who, with a group of dedicated brothers, sought out and provided hope for, the last, the lost and the least of their communities.

Representing the Brothers at this special occasion were Auxiliary Visitor, Brother Timothy Peter fsc, Brother Joe Gabel fsc, Brother Michael McCabe fsc and Br Tony Cummins fsc. Archbishop Comensoli made a point of greeting each of our guests informally before the commencement of mass and then officially welcomed the Brothers during his opening remarks, referencing the welcome from Pope Francis to the Lasallian community in Rome recently.

"This important anniversary of your Founder is a favourable opportunity for your Institute to highlight the figure of a pioneer in the field of education, who conceived an innovative educational system in his time. His example and testimony confirm the original timeliness of his message form today's Christian community, illuminating the way forward. Pope Francis 16th May 2019)

The wonderful St James College Choir and its supporting musicians, led by Mr Joshua Romeo and assisted by Ms Rachel Urquhart, enhanced the already joyous and spiritual atmosphere for the mass. From the opening hymn, "Ready the Way' to their unique interpretation of the international Tercentenary smash hit, "One Heart, One Commitment, One Life", the choir did a superb job, even providing verses of this recessional song in French and also in Spanish!

We are very proud to have been able to play a small, but very significant, role in the international celebrations in 2019 of the 300th anniversary of the death of the Founder. Here at St James College, we look forward to continuing to celebrate, not only this year of Lasallian Vocations but also our relationships with our Lasallian brothers and sisters right around the world.