Posted by Jordan Grantham on 16 November 2018 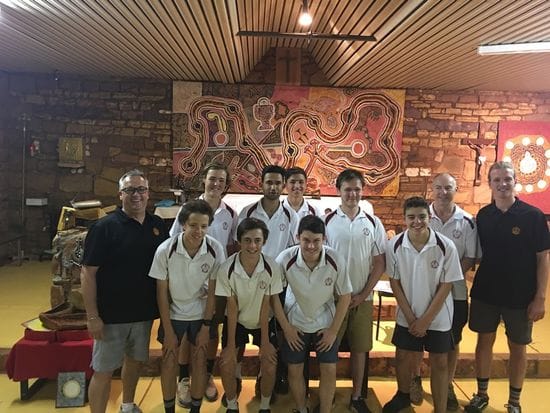 In the second week of the school holidays, eight students and three staff members travelled to remote Western Australia, for the 2018 Balgo Immersion Trip. After a year off, it was great to see the Immersion Trip resume, and the connection between St James College and Luurnpa Catholic School in Balgo rekindled. After departing Bentleigh East on a cold morning, arriving in sweltering Balgo some 36 hours later was initially quite a shock. The boys quickly adjusted to Balgo, a remote Aboriginal Community in WA. I commend the eight students who gave up their own time to spend a week in a completely different environment, living out their Lasallian call to serve. It was clear that by the end of the trip, the presence of the students was very much appreciated and valued by the community and children of Balgo. The impact these students had and their willingness to get involved and learn about the people, culture and community of Balgo was impressive.

Below is a brief recount of the trip, put together by the eight students: Conleth, Dominic, Cailen, Rhys, Max, Adam, James and Daniel.

We arrived in Alice Springs early Monday afternoon and checked into the youth hostel just before lunch. After some free time, we entertained ourselves at the hostel by playing darts and having a swim in the pool. In the late afternoon we went to Woolies for our shop before the next day's journey, where we all stocked up on snacks for the drive to Balgo the next day. Later that evening we set out for a walk to Anzac Hill to watch the sunset over Alice. After a 5am wake up on Tuesday morning, we packed our bags and prepared ourselves for the ten-hour journey that lay ahead on the bumpy roads of the Tanami track to Balgo.

After settling in to our accommodation at Luurnpa Catholic School, we watched the incredible sunset over the pound, a vast area of cliffs and rock formations left over from the inland sea that was once there.

Every night while we were in Balgo we went out to the basketball courts to go and have some interactions with the kids. As the days were so hot, the locals waited until night time and all flocked to the basketball courts. At the courts there was a live band who sang all night until we left. We played basketball with some of the older boys and girls while the younger kids enjoyed playing footy around the courts. The kids were very welcoming and would always tap your shoulder and run away or take your hat but were very happy to have us there. By the end, the students would be running out to greet us and were thrilled we were there.
On Wednesday we visited Warlayirti Arts Centre, the local Art Centre. We were given a tour and shown plenty of Aboriginal art painted by the elders of the community and were fortunate enough to see some of the locals painting in the studio. We were shown various cultural artefacts, including spears, baskets and boomerangs.

On Thursday in Balgo, we were taken by the elders to a sacred place with indigenous rock art. It was a fair distance from Balgo. Once we were there, one of the elders shared a Dreamtime story of how this part of the land and the rock formations were created. We followed her and several of the local children down what looked like a dried-up creek and into a ravine and we followed them into a dried up waterhole with some art on the walls. The rock art was intricate with one of the elders saying it showed the path of the rainbow serpent, from water hole to water hole.

On Friday, we drove out to Lake Gregory, which is all that is remaining from the inland sea that was once there. With a few elders and many local children, we made the one-hour trip through Mulan to the lake. Before going into the water, we were 'mudded up' to protect us from the Rainbow Serpent living in the lake, according to the Aboriginal Dreamtime story. What ensued was an all in mud fight which was in equal parts fun and exhausting. After we had a swim, we were fortunate enough to have the elders cook us damper, with kangaroo tails and potato, in addition to the sausages we brought. We all sat around eating lunch together, as birds circled and camels and horses wandered past. Being able to swim in this saltwater lake was truly incredible and a unique experience, unlike any other.

On our final day in Balgo, the boys were taken by the elders to the location of the Old Balgo mission. After a thirty-minute drive in the troopie and multiple bumps along the way we made to the old mission, upon arrival we were greeted with the dusty ruins of an old Australian mission. In the town stood the ruins of a Bakery, Medical centre, Schoolhouse and the well that the town used to get their water from. The elders told us stories about the buildings in the town that gave us further insight to the history of the mission. The reason that this is the old Balgo mission is because the main source of water (The well) had dried up, forcing them to move to move to the current town of Balgo. We were lucky enough to be shown this by one of the elders who lived in Old Balgo when it was still operational.

On our last night in Balgo we headed down to the church for a Mass. The church was small but it was filled with elders and their families, including their dogs who kept walking in and out of the Mass as much as the people did. The nature of the Mass was very relaxed, peaceful and welcoming especially when the locals were praying for family members. This nature was mainly because of the songs, which were like nothing we had ever experienced. Singing to the rhythm of an elder using clapsticks, these songs were partly sung in English and partly Kukatja, of which each line was sung at least twice, which was funny. The highlight of the Mass was when we received a blessing from the locals, from this blessing you could tell that they appreciated our efforts especially with the kids and made us feel extremely welcome.
Author:Jordan Grantham
About: Communications Manager, Lasallian Mission Council, DLS District of ANZPPNG.
Subscribe via RSS
Tweet