Posted by Jordan Grantham on 25 September 2018 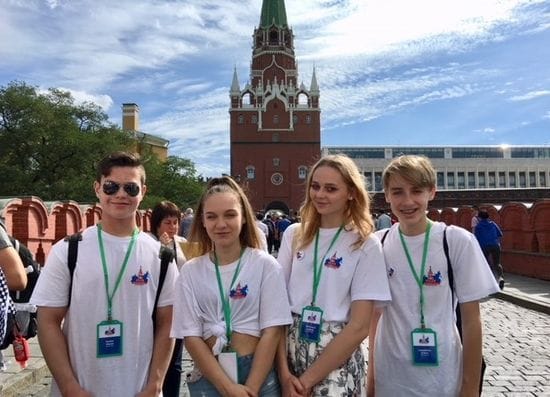 Above - Elina Gretchkosiy (second from left) with new friends in front of the Kremlin, Moscow. Photo: Gretchkosiy family.

She had to present a dramatic literary work in Russian that was assessed on language knowledge, artistry and creativity.

As a result, in August 2018 she travelled to Moscow to represent Australia in the "Hello Russia!" International Youth Forum, with three other young Australians from Perth, Melbourne and Sydney.

"This trip has really opened my eyes when it comes to how life is different in every country. We represented Australia and conveyed Australian history and culture to other Russian speaking kids across the world," Elina said.

The competition and trip were sponsored by the Ministry of Foreign Affairs of the Russian Federation.

"Going on this trip was an amazing experience," she said.

Almost 350 teenagers from 82 countries spent one week together learning about Russian language and culture. They visited the Kremlin, cultural exhibitions, art galleries, museums, Moscow State University, the Cathedral of Christ Saviour and many other sights in the town.

The De La Salle Brothers never reached Russia but have been widespread across Eastern Europe, including in Hungary, the Czech Republic, Poland, Ukraine, Romania and Albania. These countries were territories of the former Union of Soviet Socialist Republics (1917-1991), headquartered in the Kremlin. Br Gerard Rummery wrote about the experiences of De La Salle Brothers behind the Iron Curtain in his book Brothers to one another.

Elina made many new friends from different countries and really enjoyed the unforgettable journey.

"Overall, I recommend everyone that has an opportunity like this, to take it, explore language, cultural heritage, and explore the world," she said.

With thanks to The Star newsletter of St Michael's College, Henley Beach.