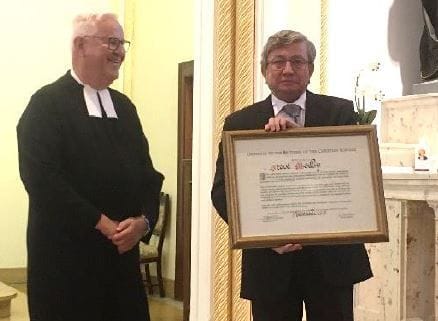 "Living gracefully" was how a life-long friend and classmate summarises Steve Molloy's life. That achievement, in terms of his service over twenty years, was recognised by the De La Salle Brothers, in their conferring "affiliation to the Institute" on 27 March 2021.

Br. Chris Gorringe, previous District Bursar (RIP) outlined in a commendation to the Br. Visitor and his Council that Steve was educated by the Brothers at De La Salle College Caringbah and De La Salle College Cronulla. "He has constantly expressed gratitude for the influence of his teachers, naming specifically Br. Quentin O'Halloran and Br. Paul Rigney. He attributes to the former his love of literature and culture, even recalling parts of Br Quentin's speech at his final-year graduation ceremony. Steve always speaks of the Brothers who taught him with affection and respect.

"In 1997, he was appointed to the position of Bursar at Oakhill College Castle Hill, a position he held until his retirement in 2015, having served with four Brothers Principal (Ambrose Payne, Chris Gorringe, Ken Ormerod and Peter Ryan). In addition to demonstrating competence in business and financial matters, and proving himself to be a loyal supporter of the diverse Principals with whom he worked, Steve proved himself to be a genuine Lasallian community-builder, encapsulating in his relationships with others the very best of our Lasallian ideals, including a deep compassion for the poor, which he demonstrated in his approach to families who could not afford to pay fees. Likewise, he showed practical concern for staff who were in need of practical or emotional support - for whom he became a reliable friend and confidant and for senior students. His community-building was shown in the welcome he invariably gave to visiting alumni and to Brothers who called in to the College, often unannounced, in his introduction of regular College reunions for alumni, and in his close involvement with the Parents & Friends Association".

Early in his Oakhill career as College Bursar, "Steve responded positively to the invitation of Br. David Hawke (Visitor), to join the District's Economic Council and remained on the Council until his recent retirement, brought about by a pressing need to provide care for his ageing parents. As a member of the Economic Council, Steve was an active contributor to discussion, showing a person with independent views, but always prepared to listen and assist the Council in working collaboratively. His expertise in financial matters, and especially in planning appropriate asset management strategies, has proved most valuable in the current circumstances, where the District is facing financial challenges.

A priest-friend, Fr. Terry Gleeson, notes his "sharp intelligence and inquiring and critical mind, balanced by humour and flexibility, compassion and tolerance" in the significant impact he had in helping advance the Lasallian District. Br. Ambrose, a close working colleague, noted on the occasion of the conferral Steve's habitual "getting on" with his work, with qualities highlighted in the event's prayerful reading of Romans 12 genuine affection for people, patience and a calm demeanour.

Steve's other personal qualities of honesty, loyalty and trustworthiness, also underpinned his long-standing service of the District in a wide variety of roles. A worthy recipient of the highest honour given to Lasallians, in the Institute of the Brothers of the Christian Schools! And a service willed with grace.