Posted by Anna Zsigovits-Mace on 10 February 2021 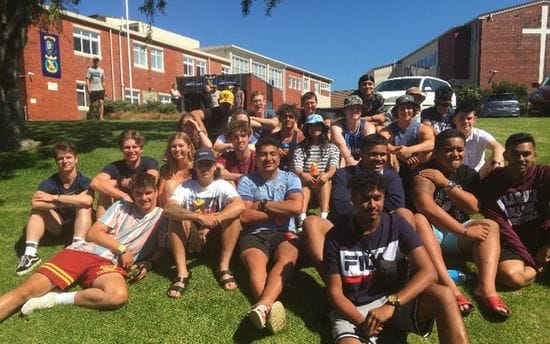 With Student Leaders unable to meet up, as usual, the New Zealanders extended the virtual District encounter on 20-21 January, with a full leadership camp from Sunday 24th January to Wednesday 27th January at Francis Douglas Memorial College (FDMC) in New Plymouth. With FDMC leaders were those from John Paul College in Rotorua and De La Salle College in Mangere, Auckland.

"Our founder, St John Baptist De La Salle (Patron Saint of Teachers) had a very sound philosophy that students learnt best when they were expected to do as much as they could for themselves, with the encouragement of their teachers, who would be like older brothers (and sisters) to their students". The goals of the Camp were to help the leaders learn about themselves as leaders.

The Sunday involved affirmations, joining with the Parish Youth at St. Joseph's for Mass, and then pizza. A photo challenge extended through town, ending at Pukekura Park, where ice cream was served, before viewing the Festival of Lights.

"Day Two, Monday was our physical challenge. Led by Mr. Matt Lash, PE teacher and Adventure Racer, we drove to the Plateau carpark on our beautiful Taranaki Maunga. From here we tramped down to Wilkie's Pools, down to the Mountain House, then down to the stunning Dawson's Falls. Down, down, down before heading back up, up, up to the Plateau carpark. What a walk and what a pleasure to see young people checking in with each other, supporting those less physical, carrying their teacher's bag for them! A challenge accepted and met. On Monday night, Paul Rangiwahia was the speaker on mental health and one's own well-being. He then shared his art work and each student chose the section that spoke to them, before sharing their thoughts. Courage in abundance!

"Day Three was all about the skills of leadership. Dignity, communication, authenticity, and most importantly letting God lead. Sir Br. Pat Lynch led a session on the Lasallian World. We are brothers and sisters to each other. Around the world there are many Lasallian schools teaching and learning through the same charism. 'Enter to Learn, Leave to Serve'. After dinner, we had gathered Leaders from previous years: the Leaders' Panel was a huge success. They shared their experiences, then answered a multitude of questions from our 2021 Leaders. We awoke to the last day, gathering one last time in the Chapel for a liturgy of anointing and blessing. Our young people identified their gift of leadership; they were anointed on their hands with oil, and given a lapel cross. On departure, they were brothers and sisters bonded forever in their Lasallian Mission".