Posted by Jordan Grantham on 15 January 2019 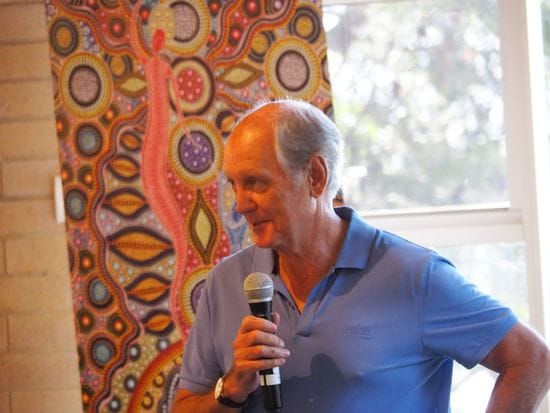 Merv McCormack, Executive Director of the Lasallian Mission Council, shared insights on Authentic Leadership at the 2019 Lasallian Student Leaders Seminar, drawing on more than 40 years' experience in education, much of which focussed on the leadership development of teachers.

The opening challenged and caught the attention of the students: "You're not going to change the world ... but you might change some people along the way and that's your gift to them."

Merv discoursed on his philosophy of leadership which centres on character for close to an hour, connecting the virtues of a leader with the interests of students, seasoning the presentation with literary, historical, humourous, self-deprecating anecdotes and concern for the well being of student leaders.

"The person I want you to take the most care of this year is yourself because as leaders, if you're not on top of it yourself, you can't lead."

The virtues of a leader include authenticity, appreciation, humility, strong relationships, resilience, courage and optimism.

One of Merv's personal models of leadership was his uncle Brian, who fought on the Kokoda Track "not far from Bomana" and exemplified the virtue of appreciation.

"My 19-year-old uncle was killed later that day."

He highlighted the significant difficulties of life for many in the Lasallian family, notably in Pakistan and Papua New Guinea.

"How lucky we are in this part of the world and we have much for which to be appreciative."

Other highlights from the presentation included footage of Derek Redmond's 1992 Olympic race, a story about St Francis of Assisi praying constantly through helping others and the advice to try to "Catch people doing good."

The talk was preceded by a youth led workshop considering prominent leaders.

Barack Obama, Donald Trump, Homer Simpson and Disney's Moana were some of the leaders students chose to examine in small groups.

Many student leaders introduced themselves confidently to the group and shared an insightful analysis of their chosen leaders.