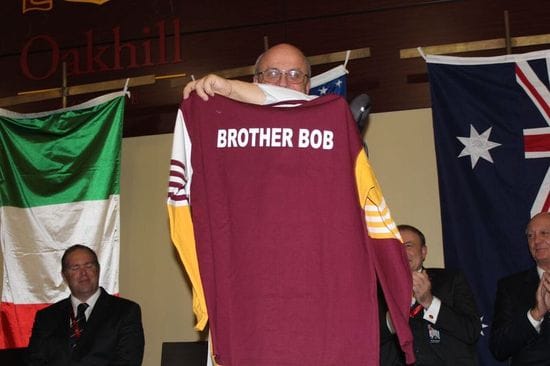 The Superior General of the De La Salle Brothers, Robert Schieler has praised the overseas immersion programs available for senior students in Lasallian schools in our District, saying they reflect the importance of an authentic learning experience beyond the confines of the classroom.

Br Robert has received a warm welcome during visits to Lasallian schools in Perth, Adelaide, Sydney, Melbourne and Port Moresby in his second visit to our District since becoming Superior General in May 2014.

In a speech to 1700 students at Oakhill College in Sydney, Br Robert said one of the greatest strengths of Lasallian education was its global reach which was also well reflected in its volunteer immersion programs for senior students and Young Lasallians.

"The education you receive here is as much inside as outside the classroom", Br Robert told the students at a specially convened assembly.

"While globally our efforts may seem like drops in the ocean, these small contributions can still make a big difference in improving the lives of disadvantaged peoples around the world", he added.

The Oakhill College band played a rousing rendition of the Star Spangled Banner to welcome the U-S born Superior General with the American, French, Italian and Australian flags displayed on the stage of the Centenary Sports Centre in honour of his visit.

Guests at the assembly included Pacific Asia Regional Councillor, Br Ricky Laguda, the Executive Director of the Lasallian Mission Council Merv McCormack and the Chair of the Oakhill College Board, Chris McNicol.

The college's Acting Principal Jonathan Byrne told the assembly, he was proud to see a group of senior students volunteer recently for aid projects in Cambodia and Vietnam and strong ongoing support for Mission Action fundraising for Pakistan translating Lasallian commitment to the poor into action.

College captains Ryan Papenhuyzen and Madison Hare presented Br Robert, affectionately known as Br Bob, with a college jersey emblazoned with his name on it and another jersey with an Indigenous Australian design as a memento of his visit. 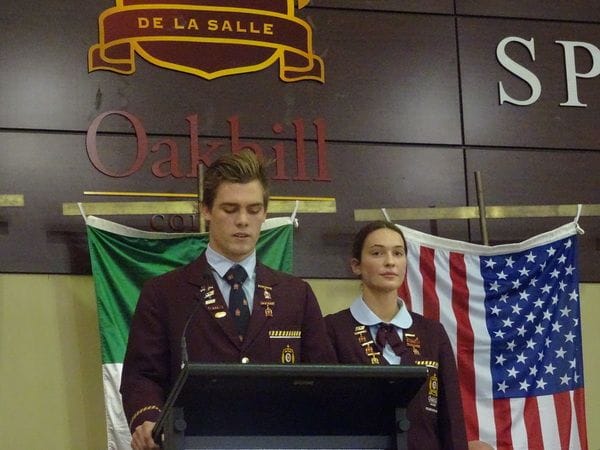 This year marks the 80th anniversary of the school and Br Robert blessed student badges to celebrate the event and was presented with a badge to wear himself. 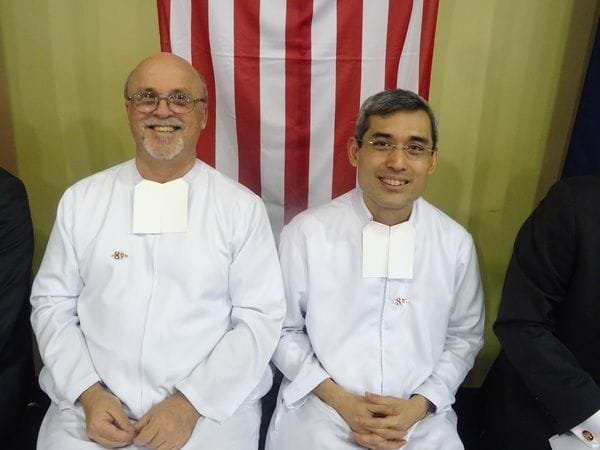 He later spoke at a luncheon for 100 staff members, reflecting upon the pivotal role Lasallian partners have played since St John Baptist De La Salle founded the Institute in the 17th century.

"Women have particularly played a critical part in that journey stretching back to the wealthy relative of the Founder, Mrs De Croyeres who suggested a pivotal meeting with the French educator Adrien Nyel which helped De La Salle expand his network of schools", Br Robert told the Oakhill staff members.

"In today's world, our Lasallian network is incredibly diverse, educating one million students including in over 60 universities, the lay group Signum Fidei and Lasallian works such as Kids Helpline here in your District".

During his visit to Sydney, Br Robert also received a warm welcome at De La Salle Ashfield which is marking its centenary this year.

In a speech to a full school assembly, Br Robert reflected upon the need for a new Lasallian pedagogy for 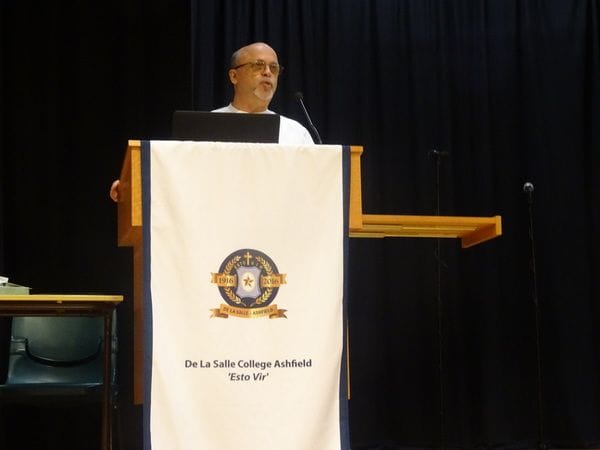 the 21st century to meet not only the demands of a digital classroom, but also an increasingly multicultural and multi-faith society.

A talented acapella group performed at the assembly which concluded with a spirited rendition of the school song- Esto Vir, meaning 'Be the Best Man You can Be'.

The message resonated with a group of senior students who met Br Robert over morning tea and explained how proud they were of the school's inclusive, multicultural identity. 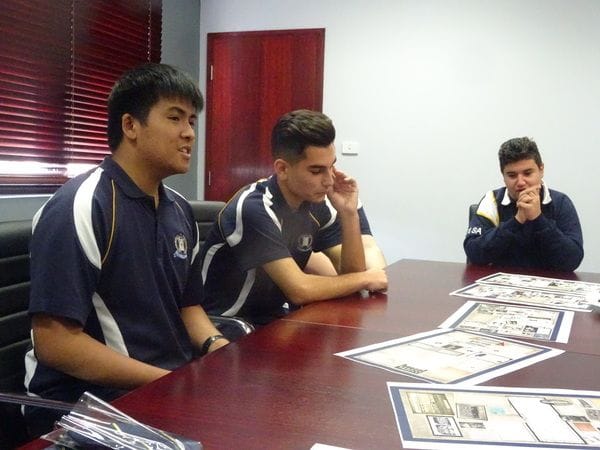 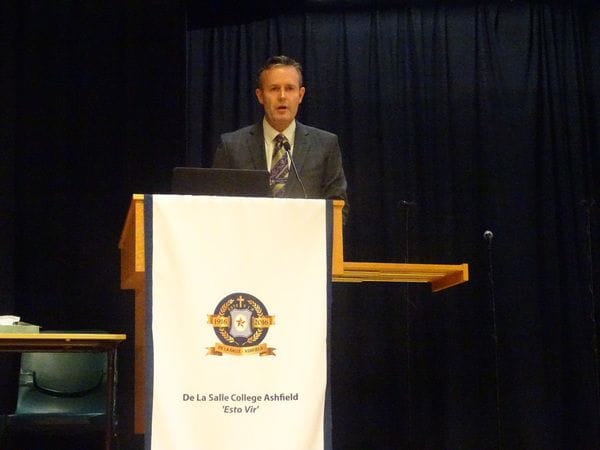 He also spoke about the school's proud commitment to the Lasallian charism with plans to display relics of the Founder in the college chapel, through the support of Pacific Asia Regional Councillor Br Ricky Laguda. 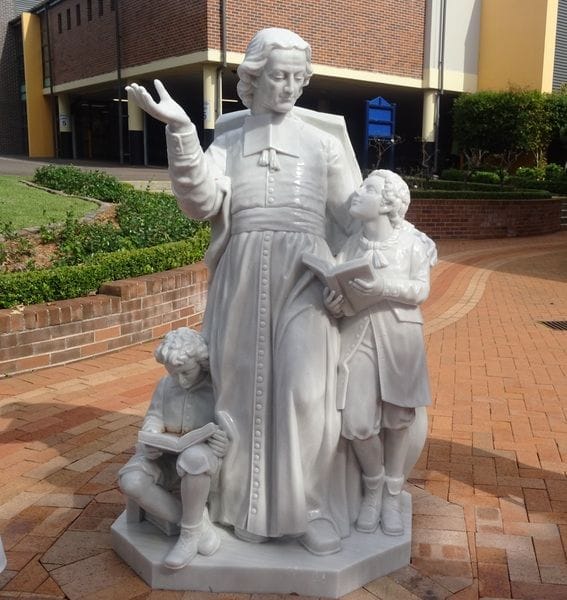 Staff prepared a birthday cake for Br Robert over morning tea which was also a good opportunity for the Superior General to meet many of the teachers at the all boys school of over 500 students. 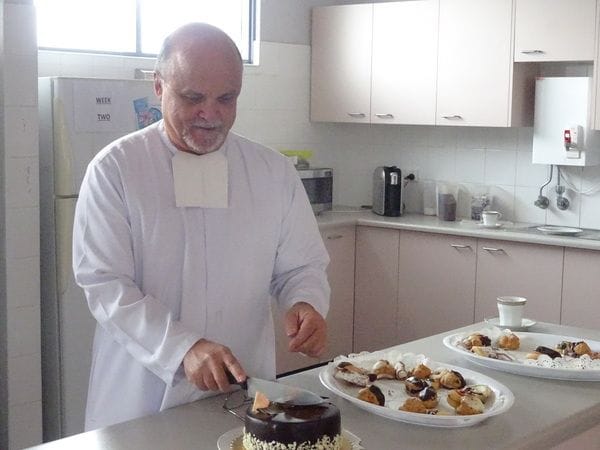 Stephen Kennaugh shared with Br Robert some of the innovative work the college has done through a Positive Psychology program adapted from Canada.

The SPIRE program promotes a wholistic approach to education, ensuring student centered learning in not only the intellectual area, but also the physical, spiritual and emotional and rational spheres.

De La Salle Ashfield caters for a wide range of abilities from gifted and talented students through the Newman program through to those requiring additional learning support.

"The senior students have shared with me what a great sense of community exists here", he added.

"That's evident to me in the staff as well which ties in well with the Founder's vision in creating a community of educators, committed to maximising the potential of every student under their care".

Br Robert will be spending some time over coming days meeting with the board members of the Lasallian Mission Council and the District Council of the De La Salle Brothers, before he concludes his visit to our District on 1 May.