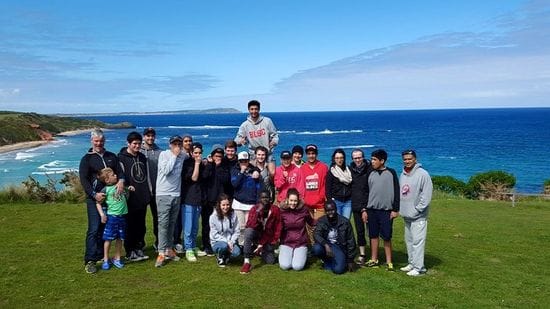 Year 7 and 8 students from Lasallian schools across Victoria held a great team building Camp La Salle over three days on the picturesque Phillip Island during their spring school holidays.

Around 20 students and four team leaders gathered for the annual camp targeted at those students who may have had a challenging year or deserved to be rewarded for improvement or commitment to their school life.

Camp La Salle Melbourne Coordinator Carl De Souza said the students benefited from team activities such as cooking and surfing and from being mentored by older youth leaders in the Lasallian tradition.

"We had small group activities with five students for every two team leaders and they acted as big brothers and big sisters to the younger kids", Carl explained.

"It helped them feel comfortable sharing about the problems they may be facing at school of home and discussing it in a supportive environment".

Carl said a lot of the students formed strong friendships through the camp and were keen on meeting up again next year.

He said this could be broadened to include the current Year 8 students once they move into Year 9.

"It's a matter of finding something similar to Camp La Salle and maybe we could bring the same group together for a basketball game or a tenpin bowling day", Carl said.