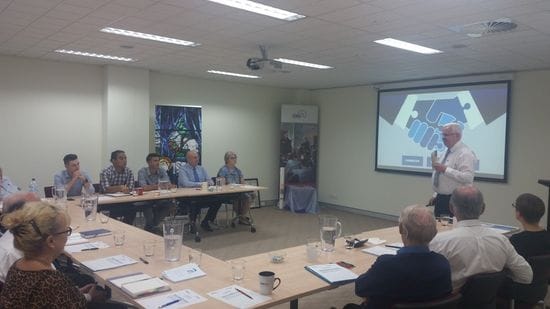 The eighteen people who work in the Provincial Office gathered for a Team Meeting on 8th February. Br David Hawke, Visitor focussed his opening remarks on Br Robert Schieler, Superior General's Pastoral Letter "One Call Many Voices".  Key points covered included Lasallian Partnership, Communion, Service and Witness. During the following discussion people shared on the impact of the Royal Commission on the Abuse of Children in Australia.

Merv McCormack, Executive Director of the Lasallian Mission Council set the scene for Lasallian Mission Services work during the year, encouraging creativity and risk taking when considering new projects. He highlighted that with the appointment of new Principals of schools a number of places are recommitting to the network of Associated Lasallian Schools. The formation section was a highlight of the day with Br John Cantwell and Amanda Proulx facilitating a sharing based on the biographies of the family of St John Baptist de La Salle.

The meeting concluded with a late Italian menu lunch with staff suggesting a similar day mid-year.