TESTIMONY: THE EXPLOSION IN BEIRUT ON 4 AUGUST 2020 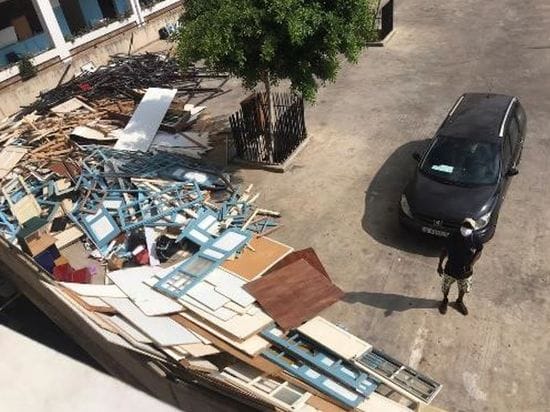 It was 9:30 a.m. on Tuesday, August 4, 2020, when I left the Fratelli Centre in Rmeileh for the Sacred Heart High School in Gemmayze, located less than two kilometres (as the crow flies) from the harbour of Beirut. That day, the accountant of the Fratelli Association and I had a long working session until 12:30 pm. The persistent difficulties linked to the fall of the Lebanese pound (the local currency) against the US dollar, the contribution and involvement of Fratelli with transparency in this difficult context, how to continue to support disadvantaged Lebanese families in this crisis that is still lasting. All this, without forgetting our target, which is the Syrian and Iraqi refugees, were the subjects of our open-ended discussion that morning in Beirut. From Sacred Heart High School, I went to Saint Vincent de Paul School located in the northern suburbs of Beirut in the Bourj Hammoud (B.H) neighbourhood. In the five-storey building, the Fratelli Centre of B.H. is housed on the fourth floor. I had the joy of seeing the about twenty Iraqi children who returned to the Fratelli Centre for summer activities. After an hour's exchange with the children, I learned that many families have been able to leave Lebanon for exile in Canada and Australia. It was 2 p.m. when we left there with the hope of meeting again on Friday, and so on until the end of August.

The last step of my day in Beirut on August 4th was a visit to the Hyundai concessionaire for the periodic revision and maintenance of the project Fratelli' vehicle. At 3.30 pm, I set off on my return journey via the Highway of the harbour of Beirut. After a stop at the Directorate of General Security where I was able to collect my new resident permit, I returned to the community in Rmeileh shortly before 6 pm local time. At 6.8pm, a strong vibration violently shook the doors and windows of the community, followed by two very loud bursts. I rushed to the terrace of the community looking for a glimpse in the air of the Israeli air force, who use to have aerial exercises over the city of Sidon (Saida). The little children of the neighbourhood started to shout Israel, Israel, Israel ... We are more than 40 km from the place of the explosion. After more than twenty minutes of hesitation and phone calls from colleagues to ensure them that I was back from Beirut and to announce an attack on the house of the former prime minister (Saad HARIRI), it was around 6.38pm that the first images were broadcast on social networks announcing a bombing next to Beirut and the huge explosion that followed. At 8:30 pm, I called the Brothers of the community of Sacred Heart from Gemmayze. Fortunately, of the six Brothers living in the community the day before, two took the plane during the night for holidays in Egypt and Mexico, the other two left in the afternoon to spend the summer in the mountains. Only two Brothers remained in the house at the time of the explosion. Thank God, the two Brothers were safe and sound. However, there were no more doors or windows in any of the rooms or offices. The blast from the harbour   of   Beirut   had   blown   apart everything, including the large steel gate. The shards of glass had injured some members of the High school security. Fortunately, there were no fatalities.

Later in the evening, we learned that the explosion had damaged the three high schools belonging to the Brothers. The most affected of the three was the Sacred Heart High School, which one had lost almost everything, as it was located near the harbour of Beirut. All the buildings, classrooms, administration, chapel, the Brothers' community, the offices of the provincial house, everything was blown upside down; the papers and machines in all the offices were knocked over. It is exactly like the whole city of Beirut that I will discover 48 hours after the terrible and resounding explosion of August 4th at 6:08 pm.

The days after the explosion:

The first day after the explosion, we took the time to try to understand what really happened. Social networks, local and international media, newsletters and any source of information that could tell us what had happened the day before were reviewed all the daylong. In the evening, a first official statement from the government gave us an idea about the origin of the explosion. A quantity of ammonium nitrate, more than 2750 tons, stored in hangar 12 of the harbour of Beirut, was the official cause of the explosion. What could have started the fire that had spread to hangar 12? What had happened to cause this double detonation? Many hypotheses were put forward, but none of them was satisfactory. All of us were waiting for the results of the official investigation initiated by the government. The government had promised to publish it within four days; we are still waiting for these results as we are starting the month of September.

From our part as a community and as Fratelli project members, we undertook to reflect on the concrete actions, to carry out in the field. What can we do? On Thursday morning, the second day after the explosion, we went to Fratelli Bourj-Hammoud. On the one hand, we went to see the damage to the building and clean the glass debris from the fourth floor occupied by Fratelli; on the other hand, we met with the owner of the building, the Saint Vincent de Paul Society, to discuss the modalities of repair. Unfortunately, no insurance in the building covers such an explosion," said the person in charge, who was very moved and touched. Repairs will be carried out using own funds. Therefore, no work will be carried out before two months, the time to assess the damage and prepare the consequent estimates.  We came out of it, disappointed and saddened. We also wanted to know if it would be possible to continue the summer activities underway with the Iraqi children. Due to force majeure, there will be no children coming until the next school year in October 2020.

On the third day after the explosion, we as the coordination team went to Beirut city centre. We visited the various stands and sheds of NGOs and all the private organisations, which are working directly with the victims. It is a veritable humanitarian assistance "souk" on Martyrs Square in the heart of Beirut, a few kilometres from the harbour. We also visited the school of the Sacred Heart Brothers in Gemmayze. That school is located in a short distance from the harbour, which was destroyed, except for the concrete, which resisted the blast. We spoke with some volunteers and leaders of the Scouts, the Eucharistic Youth Movement (EYM) and the Catholic Youth who deployed to help in the damaged houses in the majority of the destroyed area. Christians, who lost everything in a few minutes after the explosion, inhabit Mar Mikael (Saint Michael).

On the fourth day, we collected some addresses of the leaders of the groups working with the victims of the explosion. We had to find the time to sit down and talk. This was to gather the needs expressed and analyse them in order to initiate actions in connection with these direct actors on the ground with the victims. In dialogue with the International Solidarity Secretariat in Rome, we selected the following priority lines of action: