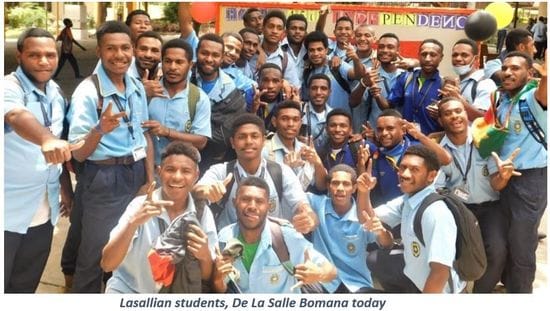 Today, many city youths live in poor settlement communities have no access to basic amenities such as electricity and running water. As school students, they may come from difficult circumstances or broken families. In the remoter provinces, there are often one-teacher schools only, to which students might walk long distances from their villages daily. Education is a social and nation-building enterprise.

The Lasallian Mission, Now and Then

Christian priest missionaries had come to Papua and New Guinea in the 19th century, established "missions" and trained young lay men, to teach and nurture Christianity in their village stations. A De La Salle Mission had begun briefly in 1914, when three German Brothers ran a school in German New Britain. It was aborted by 1921. An unknown source by Br. John Cleary numbers a possibly exaggerated 216 Catholic catechists by 1932! From the 1920's, Archbishop de Boismenu, MSC, an Old-Boy of the Brothers, had persisted in asking for Brothers for his Papuan Vicariate. Finally, in 1946, his successor had agreement that four Australian Brothers would re-establish an Our Lady of the Sacred Heart (O.L.S.H) Sisters' school at Bomana, to train young men as Christian catechists and teachers in the village schools.

The Australian Brother-in-charge (Provincial), Benignus White, visited the Yule Island Vicariate personally, and evaluated and planned carefully. Interestingly, Br. Christian Moe from his Brothers' Archives research shows him as a benign man who sent back, on his return to base, photos, a reading lamp and letters from Sisters' relatives.  His Council (senior advising Brothers) were unanimous in the decision to establish a foreign mission. There was a "helter-skelter of preparations," said Br. Christian in his manuscript history - tools of all sorts, medical supplies, a violin!, books and fly-wire, tropical clothing and church supplies, including 4 statues. Tons of stores, donated by the Brothers, went with the pioneers from Sydney.

These Australian Brothers were led by Patrick Howard (Director), an experienced school principal,  university-educated, and an admired spiritual man of 29 years. Br. Anthony Broderick had background in agriculture, while Br. Lucian Thorpe's strength was in the technical field. Lastly, Br. Celsus Maguire, a musician, was a solid classroom teacher. They arrived in Port Moresby on January 19, 1946, to be greeted by the Missionaries of the Sacred Heart (MSC) priests. 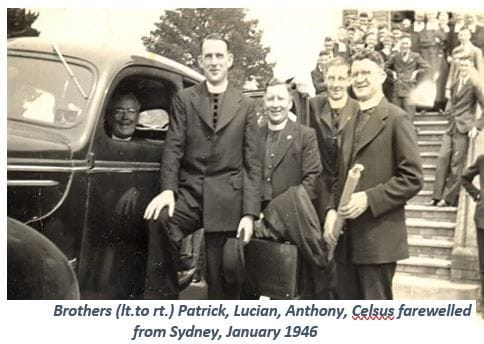 The Mission school aimed to be more than academic training for young catechists. Phillip Cahill, a former Brother, wrote in his history that "given that these young men-students would become co-workers with the missionaries at the village level, they would get also some basic technical and agricultural training.  The early days for the Brothers, (starting school on 25 February), were demanding: adjusting to the climate and the new students". The school, 17 km. from Port Moresby, was located close to the Laloki River and there was ample opportunity for developing both crops and livestock.

It must be remembered that this was a religious venture into the unknown. In one of his letters dated 25 September, 1945, Br. Benignus urges the Brothers, says Phillip Cahill, to " regard this work as the first contribution of our Australian Province towards the advancement of the cause of Christ in the mission fields.  Keep this work before the minds of the pupils and make them interested in it." The Brothers live in a community with a recognised Rule of life: "This work will demand great faith, zeal and a spirit of sacrifice, for without these dispositions our efforts would be in vain".

Difficulties piled up. Most of the 83 "students" were from two Sisters' schools, some in their twenties, and of mixed race. They found the upper primary syllabus too hard, and the afternoon work program was not to their liking. The site itself, said Br. Columban, writing later "was still a wilderness. There were three galvanised iron buildingsriddled with Japanese bullet-holes; bare interior and grass all round from 3 to 10(!) feet in height. Desolation".

The site was an agricultural lease of 300 acres with a double-storeyed boys' boarding /school block, as well as the 3 main buildings. Materials needed to put things on a steady basis were 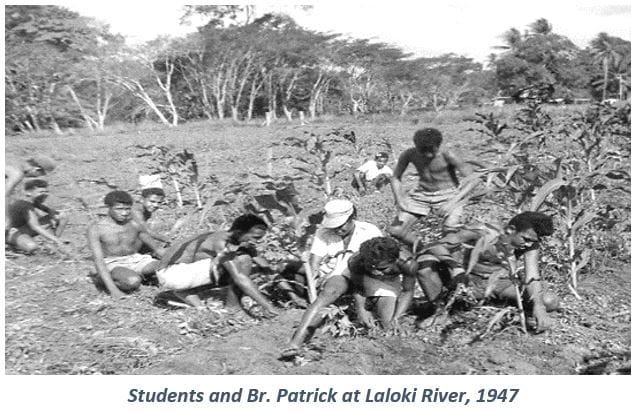 largely "obtained", relates Cahill, through means described by Br. Lucian as "scrounging" -dismantling buildings, and relocating the materials to the school from the surrounding dumps and abandoned camps, left after the end of the war. "Each morning there was school work, but in the afternoon the trucks (of boys and Brothers) would go to the army camps to see what could be picked up". The lack of promised help from technical Mission personnel may well have been the MSC men misunderstanding that the Brothers, being laymen, would be essentially skilled labourers, as well as educators. 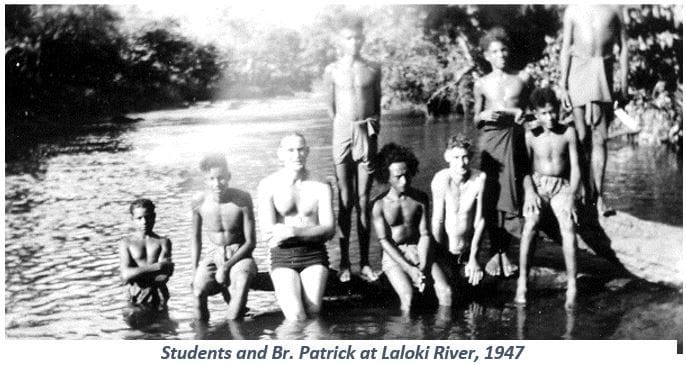 Despite the grand plans, it was obvious to Br. Patrick that "the first year was all trial and error". The Brothers had little cultural immersion (re local customs, mentality and educational methods). There was no 'practice school' for would-be teachers, and the attractions of life and jobs in the nearby capital were strong. The first year of teaching was at primary level.

Yet the ingenuity, self-reliance and drive of the new missionaries stood them in good stead. Br. Patrick was a fine administrator, a country boy, one of 16 children, and was soon asked to be the educational advisor of the Bishop. The Brothers integrated well into the expatriate Australian community; and the OLSH Sisters and the native Handmaids of the Lord Sisters (A.D.) were friends and a great support.

A startling development came when the new Bishop Sorin decided in later 1947 to transfer the school to Yule Island, 104 km off the coast, and the centre of his Vicariate. In obedience to their Provincial's agreement, "with some reluctance", said Br. John Clearly, they began the dismantling and packing of valuable items to be transported. After typical delays, the move was made in early 1948.

Classes began on March 11, with 58 boys accommodated in the Girls School, in a hall with dormitory upstairs and classrooms below. With no plant and materials for the new venture, "the boys", Br. Patrick wrote "would have a minimum of schooling and a large dose of manual work". The site was a "thorn-covered area". The builder-teachers had to survey, plan, clear and build! Brs. Patrick and Celsus with groups of boys went to the mainland to bring back milled timber.  Effectively they stayed there for 3 months, felling trees with the help of MSC brothers' advice. A Brothers' house was begun in April, when Br. Lucian returned after 7 months away with tropical diseases; it was serviceable by year's end. By December 1949, there was still no

"This work will demand great faith, zeal and a spirit of sacrifice, for without these dispositions our efforts would be in vain."

catechist class, as no boys were advanced enough to begin teacher training. Gradually, the training developed, following the Queensland syllabus, until the local Education Department issued its first certificates in 1956, including some Yule Island boys. One graduated catechist, Joseph Apini, wrote back to the Brothers in 1955: "If I am really called by Jesus Christ, no doubt he will give me the grace to do what he wants me to do for Him".

By 1952 a whole compound of Brothers' house, classroom block, shower area, toilets and dining room was completed, as well as roads around the College. In 1959, an inspection by Mr. G.S. Crouch said: "I have been able to appreciate an efficiently run school(it) easily qualifies for 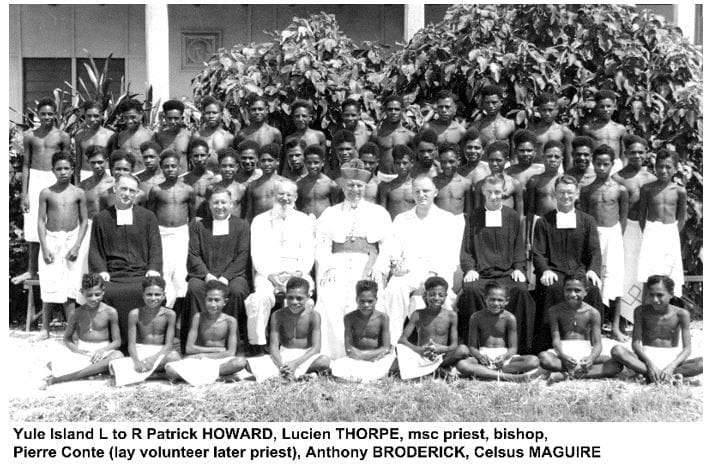 In the early 1950's a young Mekeo man from Egefa Village was attracted to pursue the vocation of a De La Salle Brother. Consequently, Peter Keaga made the long journey to the De La Salle Training College at Castle Hill, Sydney. His religious and teacher training over 7 years bore fruit in his return as a Brother to his compatriots. In addition, several students of the Brothers proceeded to the minor seminary at Ulapia near Rabaul, to pursue studies leading to the priestly vocation.

There were also valued co-workers of the Brothers too. One such person whose name stands out prominently was Mr. Francis Hau of Tsiria Village on Yule Island, whose commitment to the Brothers as a carpenter saw him continue to work with the Brothers on Yule Island, and then later on to Mainohana in Bereina. He eventually retired sometime in the late 1990s due to old age. Mr. Francis Hau was made a 'Benefactor of the Institute' in recognition of his outstanding contributions to the support of the Education Mission of the DLS Brothers. (Cahill)

After the first decade the De La Salle vision and work was bearing fruit!