THE DISTRICT MOURNS THE DEATH OF BR CHRIS GORRINGE 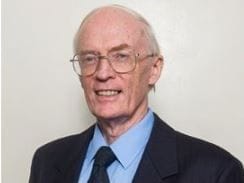 Brother Christopher Gorringe died at the Sacred heart Hospice Darlinghurst this evening Monday 13th April at 9:30 pm (local time). He had requested to die alone and did not want anyone with him as he breathed his last...

Chris is a great loss to the District and to me personally as Visitor. His brilliant intellect and grasp of legal, educational and financial matters counted him among my most trusted advisors. He was superb with the red pen as he corrected documents and minutes!

As you would have been aware Chris was diagnosed with cancer of the common bile duct some time ago.  Initially he remained relatively well and was able to continue his work.  In recent months, however, the cancer spread very quickly.  Palliative chemotherapy was to have commenced at the end of April, but the cancer began to cause significant problems to his gastrointestinal tract and his kidneys.  For the last few weeks he was unable to tolerate any food and eventually was not absorbing any liquids.

He was determined to complete a few work projects and was supported at home until April 7 when he agreed he needed to move to the hospice.

He navigated his illness, including several trips to hospital and numerous procedures, with his usual mixture of faith, stoicism, dignity, reserve and wit.  He was unfailingly grateful and courteous to the staff who cared for him.  He bemoaned the fact that he could no longer run half marathons, travel or enjoy red wine.

At each stage when asked what he wanted people to know he would say, 'just the bare facts, don't be too dramatic'.

Covid-19 meant that visits to both St Vincent's hospital and hospice were restricted to two or three nominated persons. Chris named those he wished to see.  He also named the 10 to attend his funeral.

Hopefully when Covid-19 disappears and the restrictions are lifted we can honour his life with a suitable memorial service.

Chris is survived by his sister and brothers; John, Anthony, Anne, Joseph and Gerard.  To them and to their families we extend our deepest condolences.  In his last days of life, he spoke of how grateful he was for the opportunities he had and the great life he had lived.

He appreciated the many wonderful people he had worked with and was deeply moved at the messages of support when his illness became public. I had the opportunity to read to him some of the emails I received from the Brothers and those with whom he worked.  His smiles indicated his appreciation. I was with him Sunday afternoon when Father Emmanuel, Chaplain at St Vincent's, administered the Sacrament of the sick.

In his Advanced Care Plan, he wrote:

Chris chose the readings and hymns for his Mass and Committal Service. During his recent period in St Vincent's and Sacred Heart Hospice I had some very special conversations with him. The quote he has chosen for his memorial card speaks volumes about that part of Brother Chris that only a few even glimpsed.

'Be satisfied with what you can do because God is satisfied but be assured that with the help of God's grace you can accomplish more than you can possibly imagine' (John Baptist De La Salle).

I wish to thank Peter Cartwright AFSC, his close friend, and Sister Antoinette, Health Care Coordinator, for accompanying Chris during his illness and final days.

A Mass of Thanksgiving in memory of Br Chris Gorringe will be held in the Chapel of the "Parmenie" Community on Thursday 16th April at 10:30 am.

The Mass will be celebrated by Father Chris McPhee MSC Provincial with only the local community present.

The Commendation and Rite of Committal will take place at 1 pm at Oakhill following the Mass. Due to Covid-19, the 10 persons nominated by Br Chris will be in attendance.

The Funeral of Br Chris Gorringe

May our Brother rest in peace.