TOAST TO THE JUBILARIANS 2017 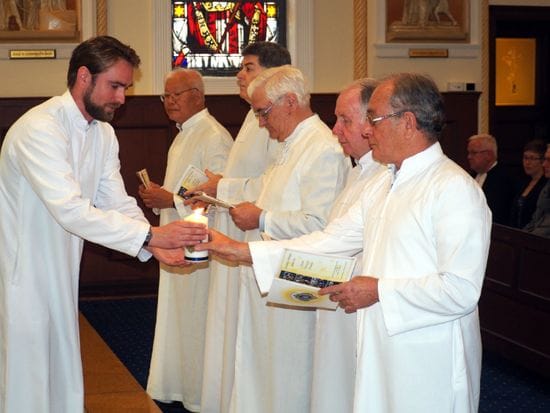 About 18 months ago, Brother David, Visitor, contacted me and said, since you were the Sub-Director of the Group celebrating their Golden Jubilees in May, it would be appropriate for you to propose the toast in their honour. I was quite delighted to respond to his request.  It was only some months later that he realized that I too was celebrating a Jubilee and that there were 6 other Jubilarians celebrating 70 years. I am sure that this request for one of the jubilarians to propose a toast to all the jubilarians was the first mistake Brother David has made since 1969! So here I am caught in the middle of this wonderful group of men whom I have had he privilege of knowing and working with over many years.

Story of Jubilee celebrations in Dubbo

At a dinner organised by the former students of De la Salle, Dubbo in the middle 60s' Dr Brian Croke, one of our former students was called upon to give a toast to the Brothers. During the course of his talk, he asked the Brothers of the then community, Brothers Theodore, Richard, Gregory Brucchauser, John Kidd and myself,  to come to the stage, to thank them publically for their dedication and commitment over many years. He told the audience that these brothers must have had a good formation because they were still at their task of the Christian and human formation of young men.

Dr. Brian realised that this was a most important phase in preparing brothers to work for the Church as the Body of Christ in the education of youth. Saint Mary Mackillop would probably have seen things a little differently. She was a pioneer of a new way living the gospel in this new country and would like us to go back a little in reflecting our formation as Religious. In one of her letters, Mary wrote to her mother Flora MacDonald on 6th June 1870, naming her Mother as her Novice mistress and goes on to say,

Your submission to the Will of God, your resignation under affliction, and your  always confiding simple trust in Divine Providence proved a wonderful comfort and  example to me when it pleased God to exercise our community in those virtues
Her only Novice mistress had also taught her that God is good and will take care of us all Saint Mary was aware of the importance of family in the spiritual formation of its members. Hence, we must never forget to thank the parents and siblings of our jubilarians for those first lessons in faith our jubilarians received within their families and which encouraged them to seek and follow a different life path those many years ago.

Our Jubilarians of 70 years had what we could call a 'foreign formation for their a Novice master was an import from the USA, Brother Francis de Sales.  With his 'foreign ideas' about how to live as De La Salle Brothers in different times and different cultures, he broke with the Irish tradition of formation which had held sway during the early years of our history in Australia. I know he was well received by the young brothers of 1947, some of whom have said to me that they only persevered because of his great friendship and liberating ideas.   I wonder whether his new ideas were received authentic by those brothers who had been in the Australian trenches since 1906.  Something, however, happened with the interaction between Brother Francis and our Senior Jubilarians that has stood them in good stead for over 70 years enabling them to do marvellous things to proclaim of the kingdom.

For our golden jubilarians, their Novice master, Brother Finian Alman, after years of successful teaching and years of being Principal and Director of St Bede's College, Mentone in 1965 was chosen as a new Novice master for the District and took up residence at Castle Hill. Because of various pressures on the Oakhill site the decision was taken to move the Novitiate to Burradoo in December 1966. It was an opportunity for the Superiors to have a complete re-shuffle of formation personnel.  Brother Finian according to Br Quentin,  was seen as the ruddy-faced workman mowing the front oval of St Bede's College or tending to the cricket pitch to the admiration of the Mentone Pub clients, one of whom wanted to employ him. Loving cricket, he was a proud Life Member of the Kingston Saints Cricket Club. "  Thank God this was so because his assistant appointed the same year had no sporting skills. His only gifts, according to one Brother Julian Bell, were a pleasant disposition, somewhat of an extrovert with a passing interest in matters religious and had a name, which could be abbreviated to Mal and so began the new process of mal-formation!

The prayerful, understanding and tolerant Director of the Mentone Community now Novice master at Burradoo continued to buy ice creams as a treat for the young novices, particularly on summer evenings. It was known that Brother Finian was partial to chocolates and ice cream and might I add a glass of red wine, which .after he had put the novices to bed , he would retire to the community room, pull down the blinds, wondering what his novice master, Brother Paul  Andrew would think and then  proceed to share these goddies with the formation community of Brother Cyril, Brother Alphonsus Nevin and the Brother Sub-Director. These were happy days for our Golden Jubilarians who expressed their appreciation for their Initial formation for when they celebrated their ruby jubilee in 2007.  They were able to all gather in Singapore in March that year with their former Director and Sub-Director.

As with our senior Jubilarians, the novices of 1967, despite their mal-formation, something happened that has stood them in good stead over 50 years. It has been said of the senior jubilarians that though formed to an ideal that was very much part of the monastic tradition of  'flight from the world', obedience, reduced to 'he who hears the superior hears me', which the Rule of Life to which they were introduced proclaimed: "due honour to Superiors pay, and in their person God obey" and I doubt if they heard of the processes of discernment and necessary dialogue with superiors and confreres in seeking the will of God. However, in the years since Vatican II they have successfully re-negotiated these teachings so as to live with constant change while remaining at peace with contemporary concepts of Religious Life. Indeed they have been leading lights for the worldwide Institute in the renewal process called for by the General chapter of 1966 and Vatican II.

Our Golden Jubilarians have had to negotiate a different set of existential circumstances. When they arrived at Burradoo in January 1967, Bother Finian often felt he was on shaky ground.  The brothers had been given a mandate at the 1956 General Chapter to review the Rule of 1947 and have in place a possible new Rule for 1966. By 1967 we were up to the 5th draft of a New Rule.  Hence he felt he was teaching from a platform of uncertainty. Our Golden Jubilarians have successfully flourished in this uncertain space, not only in Religious Life but in the Schools and institutions, they have led through times of extraordinary social, political and religious upheaval.

What has been that 'something' that happened in the formation of all our jubilarians? Both groups had a solid grounding in Lasallian Spirituality. In verse it was expressed as follows:-

In love with all your brothers live, And God to you true rest will give;
with ardent zeal your strength employ, in teaching gratis, youth with joy;
let Faith alone your actions guide, and leave all other views aside;
let all the time for mental Prayer, be well employed with love and care;
God ever present you'll adore, and oft his grace and aid implore (Rule 1947 XVI.9).
In the years at Burradoo, Brother Alphonsus Nevin and I would sit at the back of the class with the Novices to listen to Brother Finian's talks on the Spirit of Faith and the constant attention to the Presence of God

Jubilee has a long tradition among the people of God. It has its origins among the Hebrew People who wanted to make sure they felt good on planet earth.  To do this they took time out every 50 years to check up on their relationships. They wanted to make sure their relationships were right with God, self, others and the environment. They discovered that to do this adequately they needed to take time out to rest a while.

You, who have gathered here, our golden jubilarians, Brothers Ken, Paul. Garry and Adrian, our one diamond jubilarian, our senior Jubilarians, Brothers, Hiliary, Tom, Celestine, Peter, Gerard and Michael, their families, friends and confreres, have done just this. We have all had time to check out our relationship with God, through the celebration of the Eucharist, and from doing this it is the hope of Fr Brian Vale and Brother David Hawke that you are, feeling good about yourselves and that it is good to be here.

As you wait for the final course of this luncheon and the coffee that follows, there has been and still is much laughter and good cheer through the many conversations that have taken place, helped along, of course, with a little 'holy liquid' to cheer hearts, with memories from times past.  Relationships with others have been renewed and strengthened. The meal was blessed by offering thanks to God for the good things provided for us from the fruits of the earth and the work of human hands and we have not forgotten those less fortunate. What a wonderful event is a Year of Jubilee, A most precious time to proclaim the Lord's favour!

Congratulations are the order of the day.   With hearts full of deep joy, you have no doubt thanked our jubilarians for the witness they have given in their commitment to life, perseverance with the task, and amazement at their various achievements in the world of education here and overseas beyond the District of Australia to Singapore, the USA, the whole of the Pacific,- a commitment that continues still.

But let us remember that their lives have been a response to the Spirit of God who calls us all together as a small cell of the Church so that like Mary, the Mother of God they have been enabled to say 'yes',  over 70 years, over 60 years and over 50 years.  So in thanking them, we give thanks to God for calling them, for being with them, not leaving them orphans but empowering them through Holy Spirit to continue saying 'Yes' to all the events of life and to those still to come!
Author:Br Malachy Yates
Subscribe via RSS
Tweet