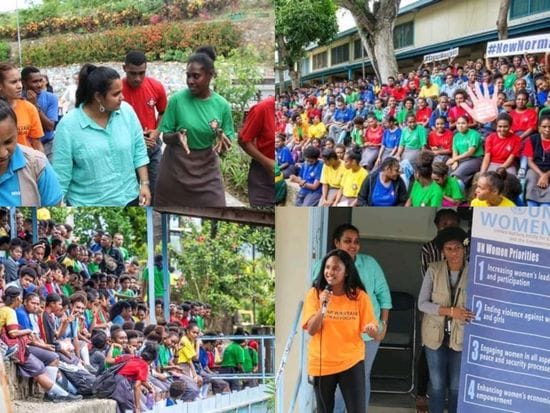 Recently, Jubilee Catholic Secondary School in Papua New Guinea hosted an incredible gathering with UN Youth Envoy, Jayathma Wickrmanayake. The gathering was organised to advocate for youth to work together for change and to create safe public spaces for women and girls. The Youth Envoy was in the country for almost a week's visit with the Deputy Secretary-General of the United Nations, Madam Amina Mohammed to Launch the UN spotlight Initiative.

Many of the students at Jubilee Catholic Secondary School shared their vision for youth voice in parliament, equality for all, freedom from discrimination and creating a world where women and girls can feel safe moving around, unity over division and health care for all. Jayathma announced to the students:

"If each one of us takes action in our day to day lives to promote sustainability, equality, respect women, respecting your sisters and mother, stop cat-calling, stop child abuse, stop violence against women and girls, then half the world's population will be a key to bringing a better world by 2030"

Parents and Citizens representative of Jubilee Catholic Secondary School, Shirley Abrielle Kaupa, revealed that one of the female students mentioned the continuous child abuse, especially every week report on sexual abuse on minors. The gathering empowered not only the females present but inspired the males to consider their actions, stand for the women in their lives and stay determined to be the change in the world that we need to see.