Home >  Blog >  We must walk together for peace: Pope

We must walk together for peace: Pope 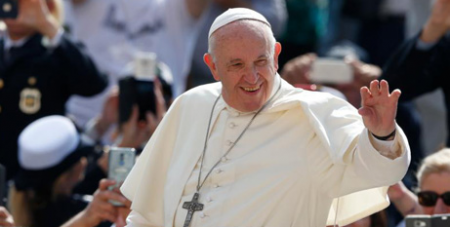 The May 31 - June 2 trip showed the important need "to walk together, both for Christians" when it comes to faith and charity, and for residents of a nation, when it comes to civic engagement, he said during his weekly general audience in St Peter's Square.

As is customary, Pope Francis reviewed his trip to the predominantly Orthodox East European nation during his first general audience after the trip.

Yet he also used the audience to remind people to take part in the "One Minute for Peace" initiative on June 8. The day marks the fifth anniversary of the Pope's historic gathering at the Vatican with former Israeli president Shimon Peres, Palestinian President Mahmoud Abbas and Orthodox Ecumenical Patriarch Bartholomew of Constantinople, and their "invocation for peace".

Every year since that meeting in 2014, the International Forum of Catholic Action has promoted "One Minute for Peace" every June 8 at 1 pm. The Pope said people of faith are invited to pray for and people with no religious belief are invited to reflect on "a more fraternal world".

In his main audience talk reviewing his trip to Romania, the Pope noted his encounter with Romanian Orthodox Patriarch Daniel and the Permanent Synod of the Romanian Orthodox Church, where he reiterated "the desire of the Catholic Church to walk together in reconciled memory and toward full unity".