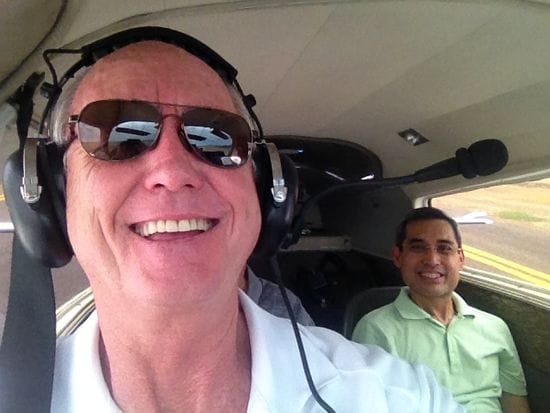 Pacific Asia Regional Councillor Br Ricky Laguda is currently visiting Australia and meeting with Lasallians across a wide number of schools, BoysTown staff and staff from the Lasallian Foundation in Melbourne.

The Executive Director of the Lasallian Mission Council Merv McCormack is travelling with Br Ricky and writes from Luurnpa Catholic School in the remote Kimberley region of Western Australia.

"The day dawned typically hot and humid in Darwin, as Br Ricky and I met Br Rick Gaffney, Principal at Balgo Hills, for the 40 minute flight to Kununurra. Shortly after, we boarded a four seater chartered flight (almost 2 hrs) to Balgo. Merv had the honour of co-piloting- Ricky's relaxed demeanour probably belied his true feelings.

The flight over remarkably Australian outback terrain was spectacular- rugged ravines, unending wide and uneven piebald plains and slopes, a landscape obviously begging for rain, interspersed with glimpses of meandering brown billabongs, and dodging threatening clouds that heralded an early start to the 'Big Wet', but by day's end had failed to deliver. Balgo locals assured that it wouldn't be long in coming. Indeed two days earlier, the community had even experienced small hailstones, a novelty for all younger members of the community.

We had the privilege of meeting numbers of the Lasallian team; some staff (including BoysTown teachers); Share the Mission volunteers; some of the local kids; and Brothers Martin Blattman & Michael Neville. Br Ricky & I also had an introductory 4WD tour of the Balgo community to get a sense of the general layout. We saw the Balgo Hilton (4 stars); climbed down an interesting ladder into a small 'chapel' that previous Sisters of Mercy had occasionally used as a quiet spot; and travelled to the nearby Balgo lookout where we viewed a panoramic vista, breathtakingly quiet, and which stretched for a million miles without a single indication of settlement. A view straight out of a Western Australian Tourist Bureau brochure!

Friday will be a chance to visit classrooms; meet the children; discuss some matters of mutual interest with WA Catholic Education Office personnel; sit with staff where Br Ricky will outline his work, while I'll have the chance to describe the Lasallian Mission Council, the team and its work, including doing a demonstration on the new District website.

It's a swift couple of days at Balgo, but with Brisbane, Sydney, Melbourne, and Adelaide schools and works awaiting their official visits, a longer stay at this most special post of Lasallian works will be for another time."