Posted by Angela Porro on 7 September 2020 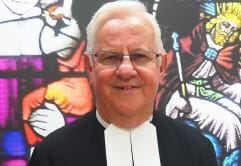 In this week's article, I will be focusing on Mother Mary, inspired by the keynote given by Br David Hawke in his visit to De La Salle Catholic College Caringbah on Friday, 14 August.

I take this opportunity to once again thank Br David for addressing the De La Salle Caringbah community regarding the Lasallian connection to Mary, our good mother. I could not do his address justice, so in my article today, I provide you with snippets of his insightful speech.

On Mary, Br David states: "Mary bears all the qualities of a hero and has been a hero to millions if not billions of people since the time of Christ. One of those people was John Baptist de La Salle. So important was Mary to De La Salle and the early Brothers, that he made Our Lady the "superior" of the Brothers: "I want Mary to be the Director and Queen of our schools." In other words, the Brothers were to look to Mary as their example, their role model and their hero. To emphasise this, way back in 1686, when De La Salle was just beginning his work, he gathered the first Brothers and took them on a pilgrimage to a famous shrine dedicated to Mary. They walked through the night to reach the village of Liesse and the parish church that held the shrine. They then renewed their vows at the foot of the statue of Mary and prayed in words similar to the College motto, that in their mission of service to the poor through education, they would 'walk worthy of God''.

The College Theme for 2020 is, 'Use your God-given gifts to serve others' (1 Peter 4:10), and how fitting that Br David described one of Mary's many qualities as that of service: Service is one of those values along with Faith and Community that are important to those of us who are part of a Catholic school community in the Lasallian tradition. On the College website, there are three large banners, 'Strive, Serve, Succeed''. When I clicked on 'serve', it reads 'serving our faith and our community' Service is all about action, about doing, about responding. Listen again to the opening words of the reading [Luke 1:39-56]: 'In those days Mary set out and went with haste to a Judean town in the hill country.' Mary did not just set out; she set out with haste. She set out promptly and quickly. Why? Because Elizabeth needed her, and Mary responded so generously to that need. Remember that Mary herself was pregnant with Jesus at the time and could if she wished not responded at all to the need."

As I often explain to the students at Caringbah since I began as REC, humble service should be a trait which we all should aim to achieve - to see a need and take action - to be a true De La young man of integrity. Thank you, Br David, for noticing that we do encourage our boys to 'take a leaf out of Mary's book' and go out and make a difference. It has been difficult to live out the College Theme this year when we had many activities planned that have had to be postponed, however, Br David reminds us all that:

"the COVID-19 pandemic and all the things that have happened in our state and our country over the past six months has reinforced to me that service does not only mean going to the peripheries geographically, but also going beyond my own self-interests to attend to the needs of others at school, at home or elsewhere. The small acts of kindness we do each day for others are just as important as major service projects. And that is what humble service is all about. We do service because we want to, because we are good human beings, good Christians, good Lasallians and we do not make a show about it."