Home >  Blog >  Youth in action in a synodal Church

Youth in action in a synodal Church

Three Australian young people, along with ACBC Office for Youth Director, Malcolm Hart, have joined with more than 250 other young people from more than 110 countries in Rome for the XI International Youth Forum, titled 'Youth in action in a synodal Church'.

Participants in the gathering represent youth from bishops' conferences, movements and ecclesiatical associations from around the world, as well as 17 young people that participated in last year's Synod of Bishops on Young People, Faith and Vocational Discernment. Among the 17 selected was Australia's own auditor at the Synod, Sebastian Duhau. The two young people selected by the Australian Bishops' Commission for Evangelisation, Laity and Ministry to represent the Australian Episcopal Conference at the meeting are Holly Roberts and Huw Warmenhoven.This significant meeting of young people follows last year's synodal process and the publication of the Apostolic Exhortation, Christus Vivit.

Over four days, Holly, Huw, Sebastian, Malcolm and the worldwide contingent of delegates will reflect on the conclusions of the Synod on Young People and on Pope Francis' letter to Young People and the entire People of God, Christus Vivit, with the aim of drawing out pastoral responses for realising the realities of the documents in local contexts around the world.

Please keep our Australian delegates and the whole meeting in your prayers and watch the ACBC Office for Youth social media platforms for updates!

Sebastian Duhau from Parramatta Diocese, who attended the Synod last year as the Australian auditor, was invited by the Vatican's Dicastery for the Laity, Family and Life as one of the 17 youth auditors to return to Rome for this gathering. Malcolm Hart, Director of the ACBC Office for Youth and Advisor to the Dicastery for Laity, Family and Life was also invited to attend.

At the close of day one of the gathering, Holly Roberts said that "one thing that keeps popping up was about being inclusive of all young people and accompanying them where they're at in their journey." Huw Warmenhoven said one of the key messages from day one was to understand that "The Synod isn't just an event, it's not something that just happened, but it's actually how we should approach Church. That is what it is, it is a synodal church. It's a church that's on a journey, it's a church that seeks accompaniment, it's a church that seeks to listen and to welcome everyone."

We at the ACBC Office for Youth are very proud of our delegates, please keep them in your prayers, and stay tuned to social media for updates. 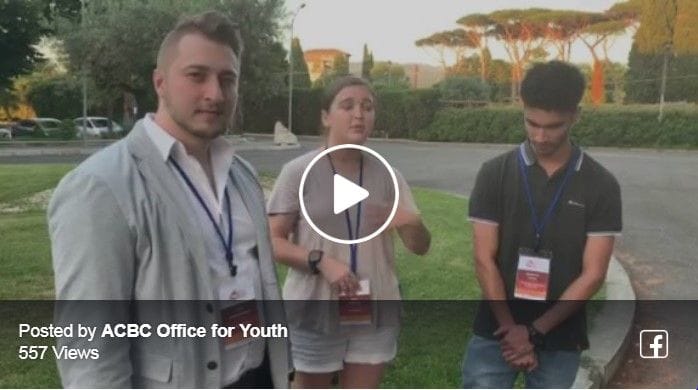 Day One Blog: from the Director, ACBC Office for Youth

The 11th International Youth Forum began with prayer (which included the WYD08 theme song) and a short welcome from Cardinal Farrell and Cardinal Baldisseri before each of the 200+ delegates were called by name and welcomed by Fr Joao Chagas, Head of the Youth Office for the Dicastery of Laity, Family and Life. A fitting and exciting beginning to such an important gathering to discuss how young people and the whole Church are called to carry forward the fruits of the General Synod on young people and the Apostolic Exhortation, Christus Vivit.

After an extended explanation of the three year process and journey of the Synod, the rest of the day was rightly dedicated to the voice of young people sharing their experiences of being part of the synod or how the synod has impacted the church locally around the world.

A personal highlight was listening to Joyce Zako, National Youth Coordinator for the Uganda Episcopal Conference. Joyce shared of the comprehensive and dynamic youth ministry programming in Uganda which included programs for catechesis, drama and music, sports ministry, lay leadership and more as she revealed ministry after ministry in Uganda with such joy and hope.

In the afternoon the young people broke into discussion groups to share the impact of the General Synod locally. Our own Holly Roberts was invited to be a group moderator, as well as Isabelle McCaffery from New Zealand. Several common themes emerged, although it was difficult to capture all the feedback from 18 groups reporting back for nearly 70 minutes. Some young people spoke of how they hadn't heard of the Synod until they were invited to attend the Forum, calling for better communication across all church life. Some shared of the great joy and transformation of being involved in one of the international pre-synod gatherings or a dynamic local synod engagement, often remarking at the surprise of being asked to contribute. Several comments highlighted the need for the Church to work with young people, not just for young people. There were also many examples of the joys and challenges of youth and adult relationships within the church, mainly focused on inviting young people into leadership and handing over responsibilities.

It may seem strange that a youth minister, such as myself, is at this youth forum. However, a small group of experienced youth ministers have been invited to explore Christus Vivit with the young people. While the young people broke into discussion groups, the youth ministers came together to discuss a greater international sharing and collaboration in carrying the learnings from the Synod forward. After many years of advocating for such dialogue it was beautiful as those around the circle shared ideas and feedback on a variety of strategies. The Dicastery for the Laity, Family and Life are truly working differently to create greater dialogue and collaboration across the Universal Church.

Tomorrow we explore Christus Vivit directly. I look forward to hearing how other countries are responding and how the young people themselves want to see it carried forward. 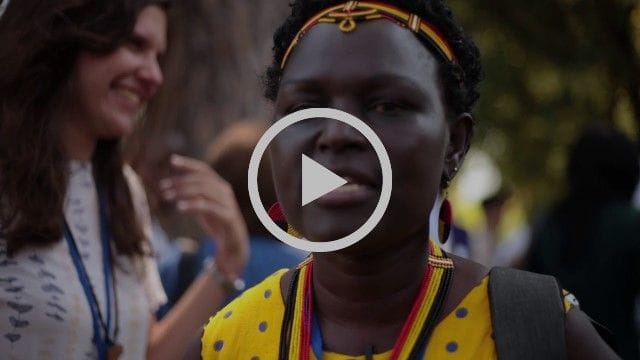