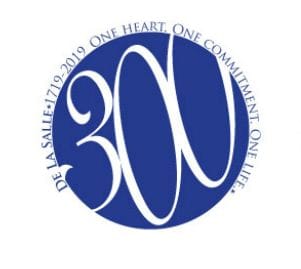 TERCENTENARY CELEBRATION OF THE DEATH OF SAINT JOHN BAPTIST DE LA SALLE, FOUNDER OF THE INSTITUTE OF THE BROTHERS OF THE CHRISTIAN SCHOOLS (1719-2019)

During 2019, the Institute of the Brothers of the Christian Schools and the Lasallian Family will celebrate the 300th anniversary of the death of their founder, Saint John Baptist de La Salle, Patron Saint of Teachers. The Institute has designated 2019 as the Year of Lasallian Vocations.

Throughout the world, events and celebrations are being planned to honour our common heritage of providing a human and Christian education to the young, and the poor, and to promote the vocation of the educational ministry. The accompanying video announces the celebration.

Pope Francis once said, "We are pilgrims from death to the fullness of life." With this understanding, the theme of the Tercentenary, One Heart, One Commitment, One Life represents the fullness of De La Salle's life and the continued vitality of the Lasallian Mission and vocation in 80 countries around the world.

"You can perform miracles in regard both yourselves and your work by an entire fidelity to grace, not letting any movement of grace go by without corresponding with it; and by touching the hearts of children entrusted to your care," (J.B. De La Salle, Meditation 180.3)

Brother Superior Robert Schieler, FSC, gives an update on events to celebrate the Year of Lasallian Vocations in 2019 and invites Lasallians to get involved. Watch now!